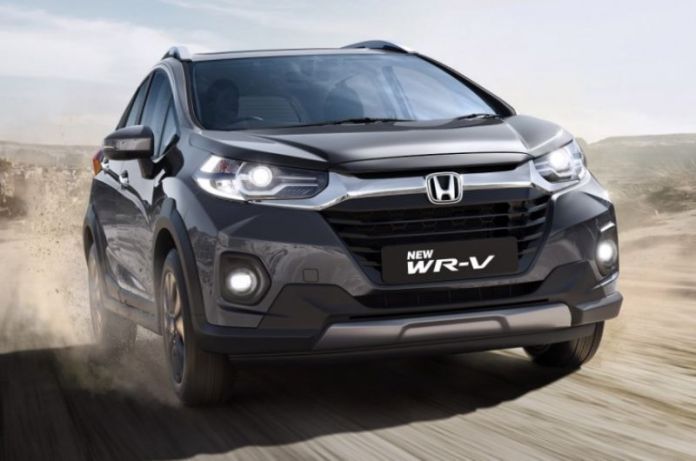 It’s all too easy to get cynical about the Honda WRV. You might look at it and go, well, that’s a jacked-up Jazz. With some off-road bits added to it and strictly speaking, you wouldn’t be wrong. Honda doesn’t have a sub 4 meter SUV, and to fill that gap in the range.

They’ve got this crossover, but you shouldn’t be cynical about the Honda WRV. Because ever since it was launched in 2017, It has sold in rather good numbers. And that’s because people see it for what it is. A compact spacious, practical crossover with a Honda badge on its nose. and now there’s a new facelifted version, and I’m gonna drive it for you today.

Let’s have a look at the exterior changes that have come with the WRV facelift. There is a bolder look to the face. Whereas before, the chrome band on the grille extends wide and joins the headlamps at their base. But the headlamps themselves are now off the led projector variety. With, a lot of nice detailing inside the large units.

The grills beneath the chrome bar. Has more prominent horizontal slats giving the impression of being larger. And finally, the fog-lamps which are now also LED-powered. And feature thicker black surrounds at the rear, and down the sides, not much has changed at all. You’ll find a new design for the 16-inch alloy wheels. But only on the diesel version.

And re-profile tail lamps that sit-in blacked-out frames and feature LED lighting. But what do you think of the WRV’s new look? You think it looks sharper than the previous version. And would you pick its crossover body style? Over the more conventional boxy stunts of the other sub 4 meter SUVs.

Let us know in the comments below. And Subscribe to our Newsletter for great regular automotive content From Motosutra.

You’re still treated to the smartly-designed angular all-black dashboard as before. With a few brushed aluminum trim embellishments. And while plastic quality is generally pretty good. You won’t find any soft-touch materials here. The only change seems to be the seat upholstery. Which gets a new embossed pattern that looks a bit sportier.

And in a similar vein, it’s unfortunate that the equipment list has stayed largely the same too. And while it is decent, rivals have taken the game far ahead.

The bigger issue is that like in the new, city the screen is a bit too dull. Making it hard to read in bright sunlight. And that’s especially true of the rearview camera speed. What’s new, well, there’s the led exterior lighting, but that’s about it.

Over to the back seat, where once again, things are much the same. While the WRV might not have the big boxy proportions of conventional sub-4-meter SUVs. Thanks to Honda’s legendary interior packaging skills. There’s still loads of space inside the cabin. Just have enough amount of knee room and even headroom. Again though not quite as good as a boxy sub 4 meter SUV is rather good.

The seat itself is pretty comfortable with good cushioning. But there are a few things I miss back here.

And the big space extends to the boot. Which at 363 liters is more than what you get in any of the current compact SUVs. And though the back seat doesn’t split, you can fold it down for more luggage room. So far, so like the old car then, but what are the new BS6 engines like to drive. Let’s start with the petrol engine.

The characteristic of this 1.2-liter petrol engine. Shares with its larger 1.5-liter sibling that you’ll find in the Honda City. Is that it loves to rev it is something we’ve loved about iVTEC and iDTEC engines right from the very first city. we take in India it is almost a shame that the rev counter on this car is so tiny. Because the needle, just, jumps through it, fast get it into the rev band. Put your foot down, and it races across, all the way to a limiter at 6500 RPM.

Now while all those revs might feel quite exciting. They don’t quite translate to amazing numbers 0-100 kph comes up in 15.1 seconds. Which is almost a whole second slower than the BS4 version, incidentally. The thing is, while that is a lot of fun for most people in everyday driving. Don’t go chasing after the red line in traffic and the city.

You tend to want to keep it in one gear and pootle along. So how does this engine handle that, well another characteristic of iVTEC engines? Is a good amount of pep at low revs and a slightly flat mid-range. And yes that, very exciting, top end and all that is characteristic of this engine too.

Trouble is you have to make sure you stay out of that flat mid-range. And that means at path throttle, say when you’re in third gear in traffic, and you want to get a move on. You do find yourself having to shift down a lot. Sure the snappy short-throw gear lever makes doing that fun. But you miss the effortlessness you get from other engines in this class.

And even when you do downshift things, aren’t always all smooth. In the transition to BS6 yet, it seems to have lost some of that lovely low-end pep that you used to get before. And that’s a shame because you really need that when you’re setting off from a set of traffic lights, for example. It’s not all bad news though, because compared to most compact SUVs, the WRV has one distinct advantage.

What enthusiasts will also love about the WRV is that it is a fun handler. You see, unlike its direct rifles, which are sub-4-meter SUVs, it hasn’t committed to a tall, boxy body style. And thus, it has a lower center of gravity, and that only means more fun in the corners. Plus, the bigger wheels and wider tires. Give you more confidence than you’d get in its hatchback sibling, the Jazz.

The only thing I would like was a little bit more weight from this steering at speed. It doesn’t quite weigh up nicely enough as you go faster. But it remains sharp and direct so, lean into a corner, and the car follows suit very tightly. Ride quality too is absolutely top-notch. They have nailed a really good blend of bump absorption and softness with this car.

Now while the Jazz hatchback will be petrol only in BS6 guys. Due to the low demand for the diesel variant, the WRV does sell well in diesel. So they’ve upgraded the 1.5 iDTEC engine to meet the new emissions norms. And the following day, we got hold of that version.

Welcome to day two of driving the Honda WRV. Today, I’m in the diesel car, and things are well as you’d expect. It’s the same 1.5 liters iDTEC diesel engine as before with 100 horsepower and 200-newton meters of torque. So the output numbers have not changed but have the driving experience.

The first thing that catches your attention right out of the door. Is the noise that this engine makes. Now there has been a slight improvement compared to the bs4 version. But, you will still hear quite a bit of clutter at idle, and there is a constant drone that you will hear as you speed up. Once again, as before, though, once you get used to the noise, this is an excellent engine.

When it comes to the way, it drives:-

And because it is so tractable at all revs. You very rarely feel the need to change gears, even in traffic. So the opposite of the petrol engine then.

Performance-wise the BS6 WRV diesel does 0-100 kph in 13.03 seconds. That is 0.38 seconds slower than the BS4 diesel car. And the difference only grows wider when you consider the in-gear acceleration. And that is not the only number that is not as good as before.

Now we have not had the chance to do our full Motosutra fuel efficiency test. Yet, but the ARAI rating for this diesel car is 23.7 kpl but, that is down by 1.8 kpl compared to the BS4 car.

This is partly because Honda has used the lean NOx trap method to make this engine BS6 compliant. And this process requires a periodic injection of the rich fuel mixture. To neutralize the pollutants trapped in the filter. Incidentally, the petrol car has ARAI rated fuel efficiency is 16.5 kpl, which is 1 KPL lower than the BS4 version.

As facelifts go then, the WRV’s is as minor as they get sure the new face. And the headlight accents do make it look a bit bolder but, apart from that, not much else has changed. I do not only mean to the way it looks, even on the inside, I wish they had improved things. And maybe added some more equipment, but that has not been done.

More than any equipment, though, the one thing this car sorely misses is an automatic gearbox. And nowadays, when people are opting for that transmission. More, it is a missed opportunity with the Honda WRV now priced from 8.5 lakh to 10.99 lakh. This car is a little bit less than its conventional compact SUV rivals ( Tata Nexon, Mahindra XUV300, Hyundai Venue, The all-new Kia Sonet ).

But then it does not offer quite as much as those cars do either. So the WRV then continues to offer what the WRV before. It did and, those are strengths of space practicality in a relatively compact package. With peace of mind and a few fun to drive dynamics are thrown in. I, just wish they had taken this opportunity to improve it and make it a more attractive package.