The insane popularity of compact SUVs just doesn’t seem to slow down and it’s not hard to see why at this price they have just about everything you want from a family car and everybody wants a piece of the pie. Mahindra wants two pieces of the pie as you probably.

They already have a compact SUV called the TUV300 below. And now there’s this the XUV300 it’s a baby sibling to the XUV500 and minor assess it’s quite different from what the TUV offers. well, it’s also packing a lot of segment’s first features and I’m going to drive it today to tell you what it’s all about. but before we go any further tell us in the comments on what you think of the XUV300 would you pick it over any of its established rivals.

Now, some of you may already know this but the XUV 300 originated from the Ssangyong Tivoli, of course, Mahindra owns the Korean SUV brand and we’ve seen the fruits of this energy in the original Rexton and last year’s or torus j4 but while those are both just rebadged versions of Ssangyong SUVs the Tivoli was thoroughly reengineered to make the XUV300 for one the length has been shaped from 4.2 meters to 3.9 meters and though there is a resemblance almost all the body panels are new.

It also uses Mahindra’s engines and suspension so really while the base platform is the same. It’s pretty much a new car.
So, what do we think about the way it looks then I know this can be quite subjective so feel free to disagree but overall I have to say I quite liked what they’ve done with it the detailing at the front where the chrome started grille the projector headlamps the vertical LED DRLs that extend down to the front bumper it all looks very classy at the back to the part LED tail lamps to give it a distinct signature the tailgate is nicely sculpted and it has a nice visual width viewing profile I like the contrast roof especially on this color of the car and the 17-inch alloy wheels too but unfortunately, the proportions are a bit off from this rear angle despite that attractive rear haunch the back simply looks too truncated about the rest of the car. It’s the price designers sometimes have to pay when making a sub 4 meter SUV. 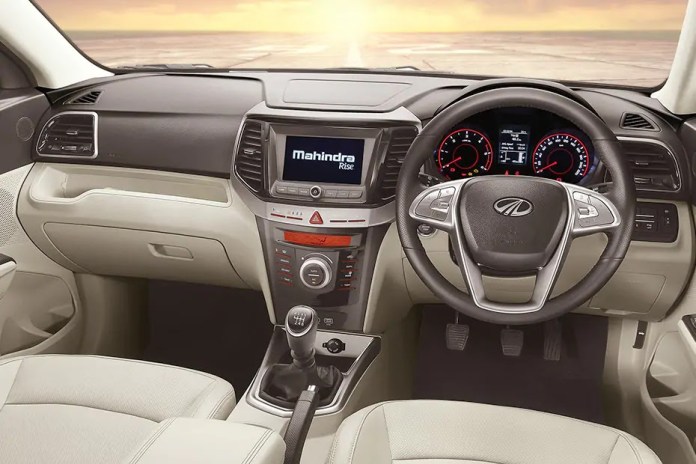 Now let’s step inside and see what they’ve managed with the interiors the interior of the XUV300 is a bit of a mixed bag for me, on one hand, the design is pretty straightforward and for the most part, the dashboard at least is really high-quality these buttons, for instance, They’re very well damped and even the ones on the steering wheel feel really premium, in fact, the steering wheel itself feels really nice to hold on the other hand there are far too many colors textures and materials on this dashboard and it looks like a bit of a mishmash and while the top half here looks nice and modern, with its 7-inch touchscreen the bottom half looks like it came from 10 years ago some of the plastics lower down in the cabin isn’t as good as say the dashboard, but that aside there’s plenty to like – there are loads of cubby holes for storage, I like the big bright dials whose backlit colors you can change like the Maruti brothers, I like the informative trip and fuel computer that even tells you if you’ve left your wheels turned before you set off and I also like that the front seats are well bolstered at the sides, but the really impressive bit about the XUV300 is its vast equipment list which I’m going to try and list out for you right now.

Most of the equipment is up there with the best in the segment and there are even a few segment firsts there’s:-
Dual-zone climate control,
Heated outside mirrors,
Auto-dimming inside mirror,
Sunroof,
Tire pressure monitoring system,
Cruise control,
Auto headlamps, and wipers,
Variable steering weight,
Engine stop-start, and
A 7-inch touchscreen, with Apple Carplay and Android Auto. 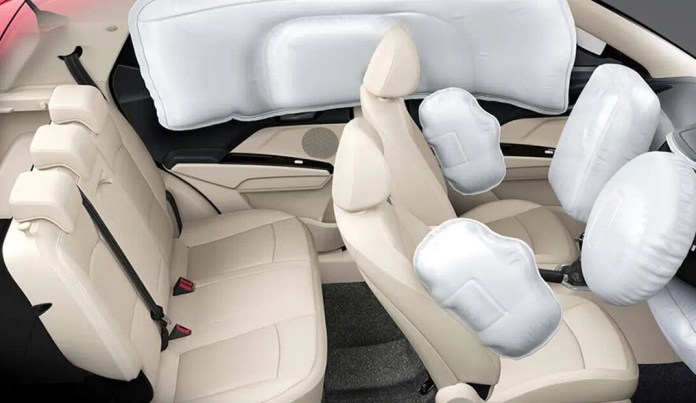 The safety kid on board is worth talking about – not only do you get a rearview camera and rear parking sensors but also front parking sensors, plus disc brakes at all four wheels, seatbelt warnings for all five passengers, Isofix child seat mounts, and a class-leading 7 airbags and of course Mahindra XUV300 got 5-star rating NCAP. An interesting feature of the back seat of the XUV300 is that it has an adjustable headrest and 3-point seatbelts for all three passengers and that’s quite cool. The bench is reasonably comfortable and there is enough space although it’s not the class best the driver seat is said to my position and I’m about 5.8ft so yes there is a bit of wiggle room but if you had to six-footers back to back they’d be a little bit tight on space.

I think this is an interesting take on seatback pockets by Mahindra although things could probably slide through however, you have to realize that for all this car’s features one thing it doesn’t have is a real A/C vent before we start driving though we should take a look at the boot as it isn’t one of this car strong points it’s 259 L clearly that it’s significantly smaller than what most rivals offer there’s also a very high loading lip meaning you’ll have to haul your bags up and over to load them in. 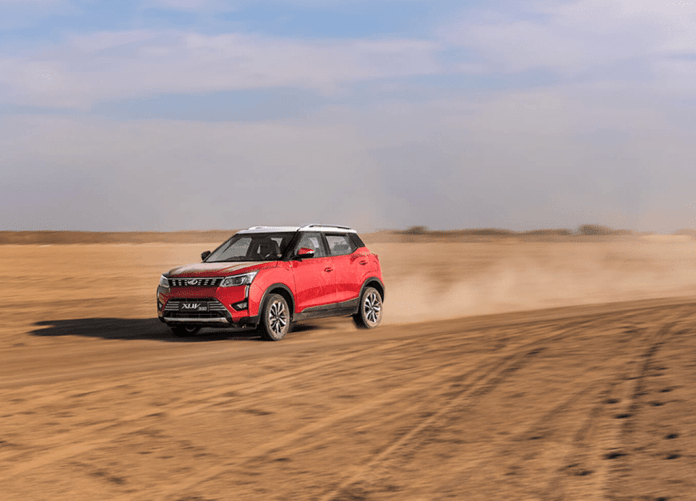 Now it’s time to get going let’s see what this Indo Korean Partnership feels like out on the road. The XUV300 is powered by the same 1.5liter diesel engine as the mind Ramirez oh but it’s been tuned slightly differently for this car the good thing is despite the retune and maintain some healthy power and torque figures a 115 horsepower and 300 Newton meters of torque which is insane for a car of this size both those numbers are class-leading for diesel engines in sub 4 meter SUVs it’s mated to a six-speed manual gearbox (or AMT) which is light to use and so is the clutch which makes light work of shifting around in traffic not that you’ll find yourself shifting gears too often in town because this compact SUV has a very strong torque reserve at the bottom end.

Mahindra says they worked hard to contain turbo lag and they have it is very little of it. However, there’s just so much torque that when it comes on boost this car just leap forward and you have to prepare yourself for that, for instance, I’m gonna put it in third gear let it dip below 1,500 RPM slow the throttle and when it wakes up close to 2,000 it just goes and goes Wow you have to be gentle with the throttle if you don’t want to go flying into the car in front of you at performance feels properly strong this thing is really quick it’s quick.
Mahindra hasn’t claimed a 0-200 time but I can’t wait to strap it to our testing here because honestly, I think it will deliver some really impressive numbers if there’s a criticism to this powertrain it’s that the power band is in very wide it’s grunt is focused at the bottom end and it’s all done by around 4,000 rpm it also felt quite refined but again that’s something I’d like to test against.

Our equipment and against its rivals another commendable feature on this compact SUV is the engine stop-start which will save you a lot of fuel every time you stop at traffic lights however in practice this takes a bit of getting used to because the system is not perfect what I’m going to do now to demonstrate is pull over to the side and put the car in neutral which should shut the engine off but it hasn’t now it’s off and I tend to set off in a hurry from a set of traffic lights but when you do that the engine hasn’t started happened, so it will stall and you have to start it up again so I guess it takes a little bit of getting used to but it’s not perfect see what I mean now you should know that there will also be a 1.2-liter turbocharged petrol engine with 110 horsepower and 200 Nm torque but Mahindra didn’t have this car for us to test at this event.

The XUV300 rides pretty decently as well it set up a little bit on the forum side but it’s not uncomfortably so bump absorption, in general, is quite good and unless it’s a really big crater or steep speed-breaker the XUV300 takes it all in its stride but what does are things a little bit are the 17-inch alloy wheels they’re doing right on 55 profile tires but you can feel a bit of bumpiness over a rough road and all this got me wondering since Mahindra has the TUV300 handle the rough of tarmac situations maybe this XUV300 is more geared to the tarmac and to corners and for that, I got a sample another cool feature variable steering while some rivals do offer driving modes that alter the engine performance this one has driving modes but only for the steering which is quite interesting you can shift between comfort, normal, and sport and though it’s not a night and day difference there is quite a noticeable change between the modes if you’re pottering around town comfort makes things really light and easy but if you’re out an open road, like I am right now prefer to put it into the sport mode which gives you a bit more heft and confidence so far so good but let’s see
If I can give it a bit of a shakedown so I’ve brought it to a slightly windy section of road to see what it handles like and I have to say I’m pretty impressed by the amount of body control there is it doesn’t roll too much which is nice but the steering doesn’t inspire that much confidence even in its sports setting still feels a little too light and while it’s sharp and quick it just doesn’t give you enough feedback from the road.

When Mahindra was right when they said the XUV300 takes a different approach to the compact SUV formula then it’s sibling the TUV300 but I wasn’t prepared for just how different it would be while the TUV is a tough boxy ladder frame SUV that’s better suited to a semi-urban environment the XUV is the sort of city crossover we’ve come to expect in this segment.
I also wasn’t prepared for just how capable this car would be the strong diesel engine gives it serious performance the cabin is for the most part very well put together it’s got a reasonably spacious passenger cell and the ride and handling balance are very good too and to top it off the XUV 300 delivers what’s easily the segment-best equipment and safety list. after a series of impressive new cars like the Alturas Mahindra seems to have kept the streak going with the XUV300 below which is sure to make a big impact in this small SUV segment.