This motorcycle right here is one of the most exciting and important launches. By Honda India in recent times. The H’ness CB350 goes straight up against the Royal Enfield Classic 350. A motorcycle that has dominated the segment over the years.

So today, we are going to talk about the design of this motorcycle. The features and give you a quick overview of the Honda H’ness.

Let’s talk about this styling first. And I think honda has really come up with an attractive retro-looking motorcycle. Because when you look at this motorcycle, it reminds you of the honda CBS from yesteryears. And that, we believe, is a good place, to begin with by drawing inspiration from the CB motorcycles. Like the 1980s CB350 and even the CB1100RS.

The company has ensured that the H’ness CB350 seems like a honda. While still using that typical classic motorcycle appeal that many will appreciate. 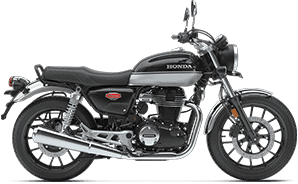 The interesting design elements that grab attention include

Adding a touch of modern elements to the design are

Again add a little bit more modernity to this retro modern-looking motorcycle. But the thing that really stands out and in a bad way is the grab rail and the sari guard. It is something that I would really get rid of the moment I take the delivery of the motorcycle. That minor nickel aside.

The H’ness CB350 looks rather attractive, and therefore the styling is indeed one among its biggest USPs. The fit and finish overall quality are good. But we reserve our final judgment about this. after putting the motorcycle through a rigorous test.

Also, if you’re falling for the urban-cool dual-tone paint job on this motorcycle.

You’d have to fork out some extra cash because this paint scheme is exclusive to the top-spec Dlx Pro variant. While the standard Dlx variant is available with single tone colors. However, a different paint scheme is not the only additional feature you get with the extra cash.

One of the segment’s first features on the honda H’ness CB350 is Bluetooth connectivity. this is the Dlx Pro version that gets you

The company calls this feature the honda smart voice control. It allows the rider to pair the smartphone to the instrument console via the HSBC app. Once connected, the rider can operate the system to access 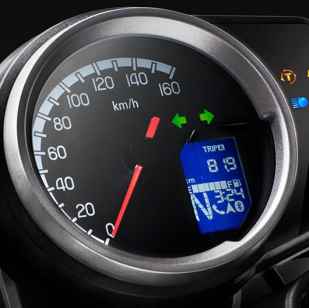 Using dedicated buttons on the left switch cube. Besides displaying the information on the part digital instrument screen. It can also be communicated to the rider. Via aftermarket Bluetooth speakers placed inside a helmet.

This difference in the analog-digital instrument console on both variants is the same. And displays a ton of information. also, you have a

Another feature that I like is the new USB charger. That’s mounted below the instrument cluster. It’s a very clever design. But you will need a mobile phone mount on the handlebar to connect your phone to the charging socket. 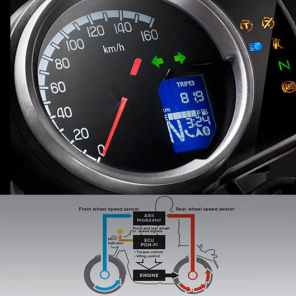 But the feature that stands out is the Honda selectable torque control. The Hstc is a basic traction control system. That detects the difference between the front and rear wheel speeds. Calculates the slip ratio and adjusts engine torque via the fuel injection. This feature can be turned off using a switch on the left side of the meter.

Let’s talk about ergonomics. Now and I think Honda has really come up with a comfortable riding position that a lot of riders will appreciate. This seat here is 800 mm off the ground. And the handlebar is pulled back towards you that relaxes in a very comfortable and upright riding position. 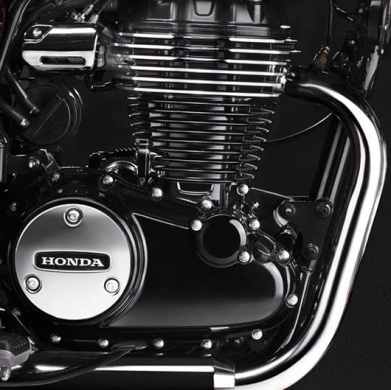 The long-strong engine is paired to a 5-speed gearbox with a slip in assist clutch. That is another first in the segment now while the power figures are right up. Therewith the competition is the peak torque that stands out, and it is the best in the class.

This should translate to effortless rideability thanks to the low and mid-range ground. Honda also claims to have taken care of vibrations by employing a balancer shaft. But the defining aspect of the H’ness CB350 is going to be the way it sounds. To give you an idea of how closely honda has benchmarked the competition. Just listen to the exhaust note.

So as you can hear clearly, the H’ness CB350 has a thumpy exhaust note. That many customers in a segment will appreciate.

Onto the chassis and the Honda H’ness CB350 uses a newly developed hard duplex crater frame made out of steel. The suspension components are pretty basic, with a telescopic fork up front. And a twin hydraulic shock absorber setup at the rear.

The focus while designing the chassis was on achieving a good balance between ride and handling says, Honda. The H’ness CB350 has a 310mm disc at the front and a 240mm at the rear. And dual-channel abs are standard.

That seems to be a good value. But the other question that needs to be addressed is the availability and servicing of the motorcycle. For now, the H’ness CB350 is going to be sold through Honda’s premium big bike outlets. The Big Wing, while the intent is to offer a premium buying experience.

There are limited biking showrooms across India. That may impact availability to some extent. It is going to be a similar case with servicing as well as the Honda H’ness CB350 can only be serviced at Big Wing service centers. That said, Honda is ramping up the Big Wing network in India.

Over the next few months considering, the competitive price point of the Honda H’ness CB350. Should the Royal Enfield Classic 350, Benelli Imperiale 400, and the Java 42 V1, or will the upcoming Royal Enfield Meteor 350. That’s too is based on a brand new platform. Will it spoil the party for Honda. Let us know in the comment section?