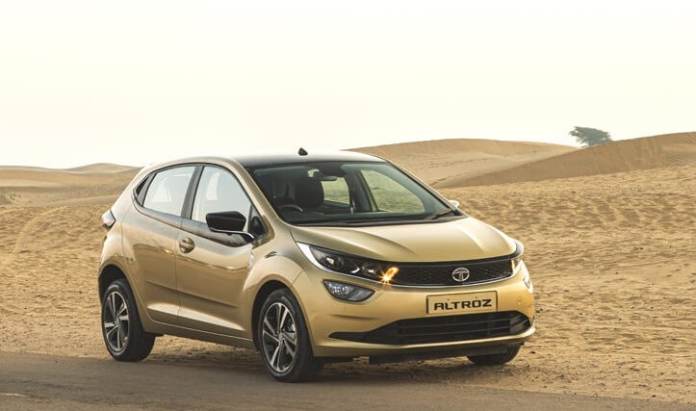 The Tata Altroz is much more than a pretty-looking hatchback for Tata Motors. This is a very significant model for the company. Because this is the company’s first stab at the premium hatchback segment, it’s quite competitive.

This goes up against models like the Hyundai i-20 and the Maruti Suzuki Baleno. This car is also the first model of the new Alpha architecture of Tata Motors. It’s a brand new platform, and this platform is going to underpin a whole lot many more models. Also, this car has been built to meet future regulations, both the petrol and the diesel meet BS6. So it’s future-proofed in a run-up to bs6.

And this is the first car from Tata Motors that meets the future pedestrian crash safety norms. That’s why you’ve got the high bonnet. Like many of Tata Motors’ new-gen cars, the Altroz too seems like a concept car for the road. The shark nose-like front end, upswept windows, and edgy tail elevate the look of the car. Black embellishments at the grille, windows, and boot lid have also been used to great effect.

It’s fair to say that the Tata motor design team has outdone itself. And in the metal and on Indian roads, this is by far the best-looking hatch. We have to start with the proportions are spot-on, but those bulging wheel arches, well, they cry out for larger tires. Also, the rear door handles housing, the C-pillar oh well a bit passe other than that it’s hard to fault the Altroz design. That reeks of some unique design elements most noticeable are black colored beltline. You can see how it jinks down from the A-pillar and then sharply rises to the rear giving the car a sporty look.

Tip forward stance, the bonnet protrudes beyond the grille to emphasize its length. While the grille and gorgeous looking headlights. have a visor like swept-back look at the rear taillights. They look terrific too, with a very 3D design. And I love those glossy black finishes all-round. That gives that much-desired premium touch. So has Tata managed to weave the same magic inside the cabin?

The interior is not quite as cutting edge as the exterior, but you’ll like what you see. The Altroz’s free-standing 7.0-inch touchscreen is positioned high up (and hence in clear sight). And what adds some flavor here is the layered effect of the dash. Material quality is good by class standards. But there are places where the panel gaps aren’t consistent.

Large seats mean comfort up front is well taken care of. But the Altroz’s thick A-pillars do create blind spots, especially on the near side. The Altroz might not be the roomiest of the premium hatchbacks. But there’s enough knee room for six-footers to sit at the back in comfort. And the flat floor makes life easy for the middle passenger too. A well-shaped 345-liter boot adds practicality to the package.

There’s much to love about the way the Altroz drives. The suspension manages to absorb the rough stuff at low speeds with ease. And high-speed stability is impressive. Turn-in is slick (better so on the heavier diesel) and, there’s a lovely feeling of connecting at the steering.

Touting doors had opened 90 degrees to ease getting in and out. But the limitation here, quite frankly, is the space between the b-pillar and the seat. So the back seat in the Altroz, it’s pretty spacious, the legroom is quite good, the Headroom is okay. But tall people could have a bit of an issue with the sloping roof.

Also, the window is a bit small. You have got a high window line. But, that’s not too much of a bother because you’re sitting nice and high up, and you’ve got a good view outside. The seats they are pretty firm good angle over here even the under-thigh support is decent. If anything, the seats are a bit too firm. And lower back support it’s a bit excessive.

This bolstering over here digs into your back. You have got an armrest. And yeah, this is a comfy place, and even for five people, it’s not too bad. Because you’ve got a flat floor so even three people can seat it is pretty wide enough is not too much of a squeeze. The flat floor helps to keep the middle passenger comfortable.

And you have a dedicated AC convent as well at the rear. There’s a charging socket – but no USB outlet, so to sum up space in the Altroz is good. But there’s not a surplus of it, and some rivals have more room in the back luggage space is quite generous. And the Altroz smartly shaped boot can hold quite a few bags once you hold them over the high lift. But has this comes at the cost of fuel tank capacity that is only 34.5 liters. These cars better fuel-efficient to give you enough range, so it’s finally time to get down to the driving.

So I’ve started in the petrol Altroz’s that gets a naturally aspirated 1.2-liter engine.

The first impression is that it’s fairly responsive at part throttle. It’s not too bad at low speeds, and even the mid-range is quite okay. But when you press further when you ask more for the engine. To be honest, it disappoints, it is not very free-revving top-end, isn’t that great. It doesn’t Rev like, let’s say the K-12 the Suzuki K-12 that is the benchmark car today. And it can get quite noisy as well as the top end, so again refinement levels are not the best in class. But the engine is quite adequate. The excitement is coming in the form of turbo petrol later in 2020.

The Tata Altroz’s 86hp, the 1.2-liter petrol engine, is pleasant at low speeds. But that pep you get in a Baleno is simply missing. The engine doesn’t have much to give at the top end. and revving the engine only draws your attention to the thrum from the three-cylinder engine. A light clutch makes the Altroz petrol easy to live within the town. But again, the 5-speed gearbox isn’t the slickest in the business.

It’s the diesel Altroz that appears like the, more, complete package. The 90hp, 1.5-litre, four-cylinder diesel engine can feel a bit hesitant in low-speed driving. But it’s quick to settle into a rhythm too. The build-up of power is linear from low down within the rev range. And if you keep the engine in its comfort zone, you’ll manage to rake up the kilometers without much fuss.

If anything, the engine does become gravelly beyond 3,000rpm. And it isn’t quite in Hyundai diesel territory when talking about refinement. On the other hand, the diesel Altroz’s clutch action is light enough. But the 5-speed gearbox feels its best with gentle inputs.

So, can Tata Motors crack the premium hatchback segment with the Altroz? The all-new platform is a great starting point, it is very sorted. And we were surprised by how good the ride and handling of the Altroz is. But dig a little deeper under the pretty skin. And some rough edges like an underwhelming petrol motor. And a lack of refinement emerges. That the Altroz blows you away is with its design. on the strength of its looks alone, the Altroz should have a lot of takers and an aggressive price at Starting at:-

The Altroz is offered in four trims, and thus the range starts with the XE. that gets the safety basics like

Also are a part of the package.

The XM-spec Altroz adds in

The XT trim adds in more goodies by way of

Range-topping Altroz XZ versions go all the way with

Each of the trims is additionally offered with an add-on pack. That bundles in specific features. The Rhythm pack gives Altroz XE and XM buyers. The choice to upgrade to the infotainment systems from a trim higher. On the opposite hand, the style pack brings in a contrast roof, stylized steel wheel, and LED DRLs to the XM.

XT buyers have the choice of the Luxe Pack. where you get a