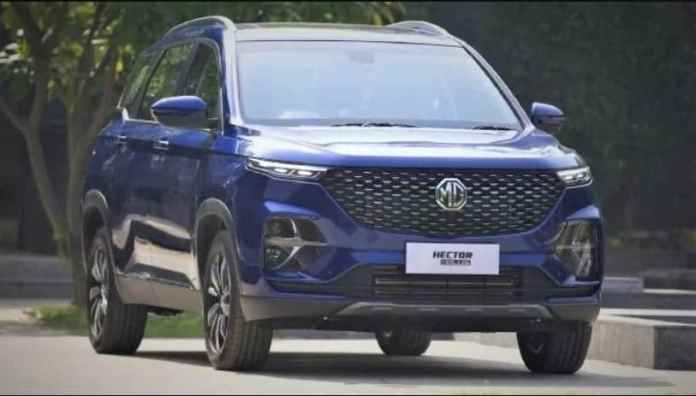 The MG Hector was one of the big success stories of 2019. And now MG is looking to build on that success with another Hector. This one’s called the MG Hector Plus. And we’re going to see it in a bit more detail to understand the additions that justify the plus in the name.

Before I begin, a reminder you to subscribe to the Motosutra Newsletter. For the latest Posts Straight to your mailbox.

First things first, The Hector Plus is not an XL sized Hector. The Plus is as tall and as wide as the standard model. And shares the 2750 millimeter wheelbase as well the 65-millimeter increase in length. Is merely down to the re-profile bumpers.

I’ll talk styling a bit later in the post, for now, I’m going to jump straight to the second row. And these new captains chairs, now if you’ve been in an MG Hector, you already know how roomy its second row is. That’s true about the MG Hector Plus as well. And what adds to the comfort element is the switch two captain’s Seat for the second row. Now, at first glance, the seats look premium. They’re properly sculpted they’re, finished in fine leather upholstery. And if you look close, there’s also this nice contrast stitching that adds to the premium look.

On the first contact, the cushioning is also well-judged. But the more time you spend in the MG Hector Pluses middle row, you’ll find that under-thigh support is a bit lacking. And you also wish that the seat was slightly wider, yet, you do get a huge range of movement. you can take the seat forward and backward to maximize legroom. And you can also adjust the backrest angle to your liking. Sadly, there are no sun shades for those large windows. And if you happen to sit on the rear left seat in the petrol hybrid. You’ll find foot room limited by the lithium-ion battery that’s positioned under the front seat. 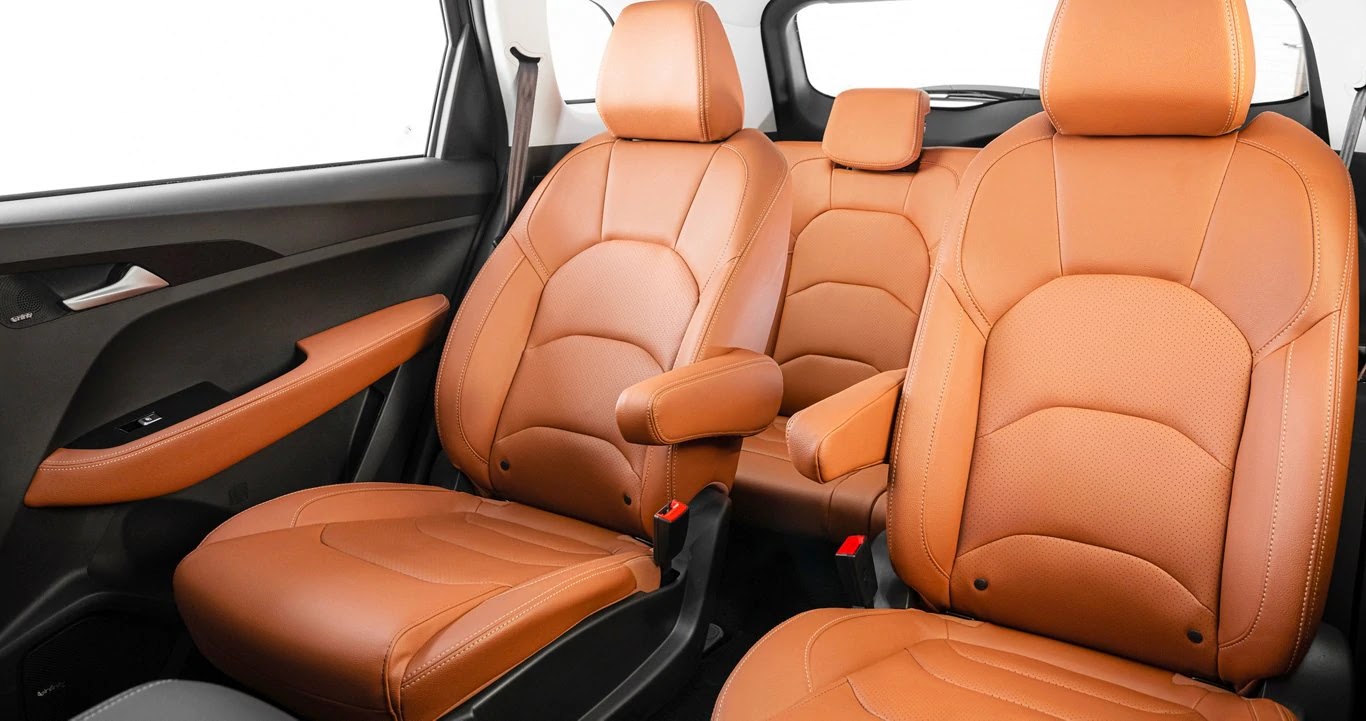 Now, shifting focus to the big addition on Hector Plus, the third row of seats. Yes, MG has added in two seats at the back, but given that the Hector Pluses body is no longer than the standard Hector. But, how roomy could it be only one way to find out. Now getting on to the MG Hector Plus, third row, it is a bit of a task to get here. And there we go now this second-row seat is set to accommodate an average-sized adult. It’s not back, and you can tell I don’t have much space, to be fair.

MG, they say that this seat is meant for teenagers, so someone in his early teens might be comfortable here. Now, apart from the space, the backrest is also a bit upright so, this is not a place you’d like to spend a lot of time in. what does help matters to an extent is that you get dedicated air-con vents. And there is also blower control right for the back seats? 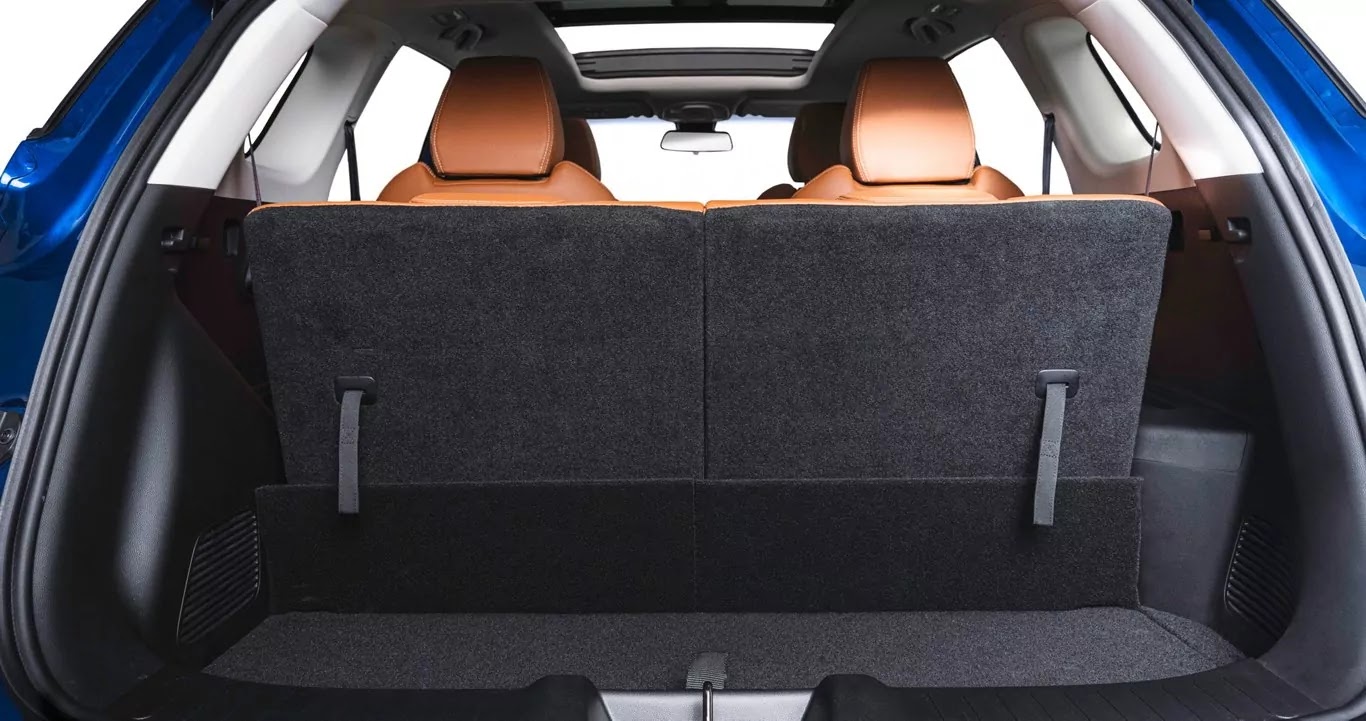 As you would have guessed, the incorporation of the third row of seats has had a bearing on luggage capacity. Unique to the hector plus is a hands-free tailgate. Swiping under the bumper activates the system, the tailgate. Opens to reveal a limited 155 liters of space with all seats up. But, the rear seats do split and fall flat when not needed to free up a very usable 530 liters. For reference, the 5 seat Hector has a 587-liter luggage capacity. 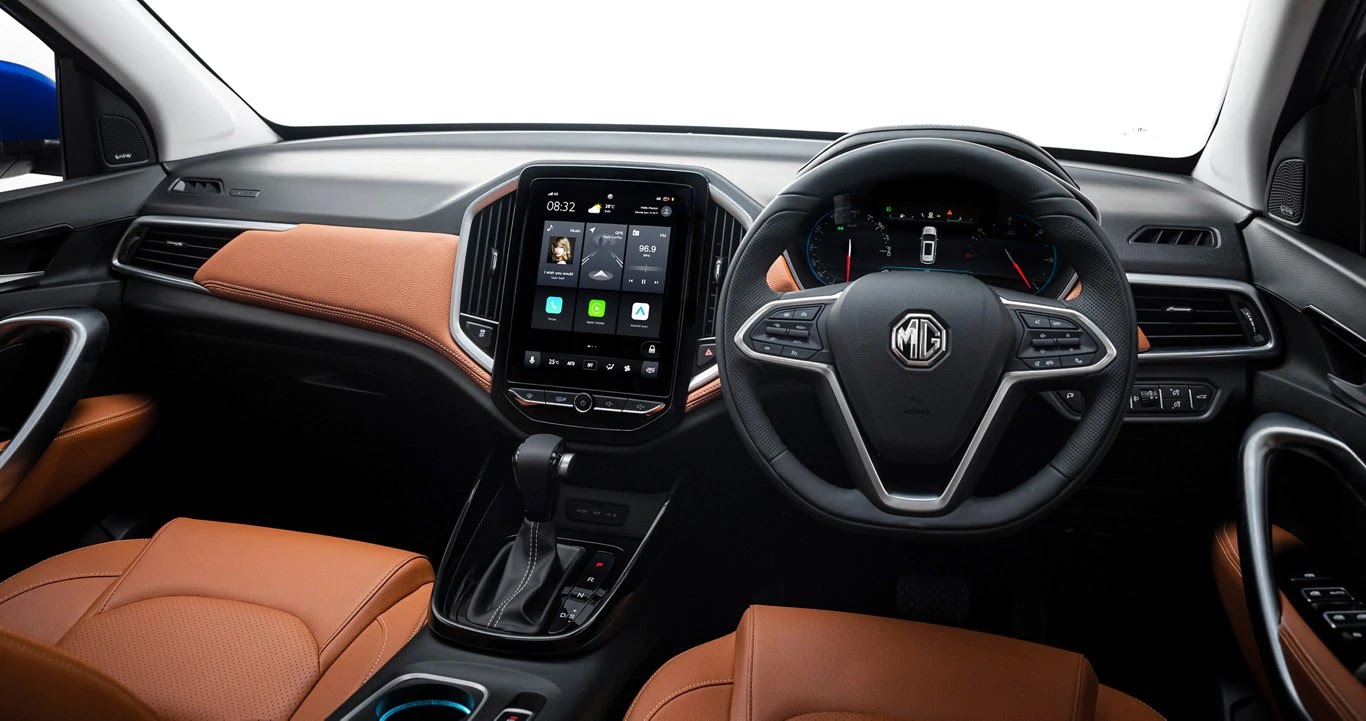 Difference Between both Interior

What about the differences upfront the MG hector pluses cabin at least, upfront is much of what we’ve seen already on the Hector. Yet, there is a big point of distinction, and that is the tan upholstery on the seats. And also a nice bit on the dashboard, the upholstery looks good, it adds another level of premium-ness to the cabin. But if you do poke around a bit more as on the Hector, you will find a fair few hard plastics inside as well.

Now, talking of the other points, of course,

Now it’s improved since the first Hector came out last year. It’s a lot smoother, and MG has also done well to add in a chat feature in our lonely times of social distancing. I’ll try it out.

Hello MG, how am I looking today – beautiful as always darling – thank you

Sure the system packs in loads of connected features. but a few physical buttons for commonly used functions would be nice. Especially given that functionality is still not iPad slick. And it often gets tripped on voice commands as well.

You’ll also find spending more time than usual, looking at the instruments. Whose glass casing catches way too many reflections in daylight. But you can’t fault the Hector Plus for features Top-spec sharp trim versions. Like the one with our pack in a whole host of goodies also to the leather at upholstery. The 10.4-inch Touchscreen, panoramic sunroof, and hands-free tailgate are already mentioned.

The Hector plus features

That’s about the interior and features. How do you tell a Hector plus apart from a standard Hector on the outside? 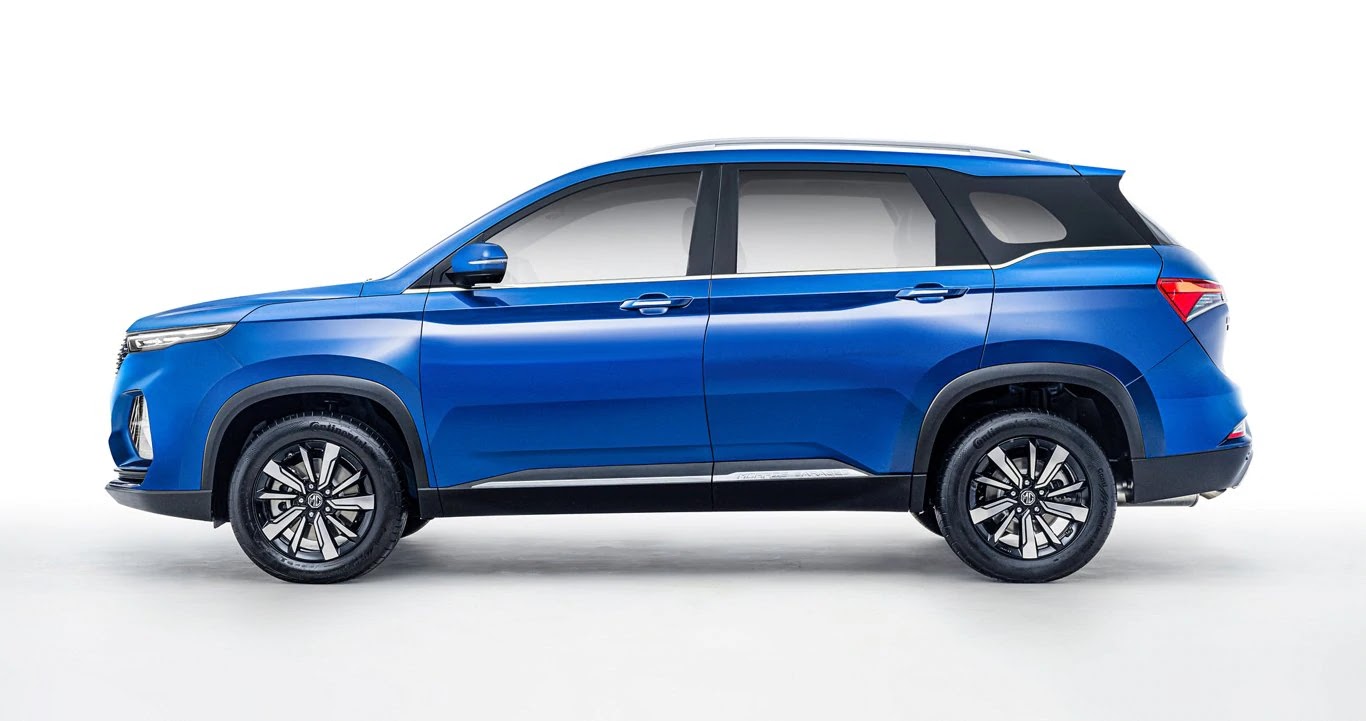 But you won’t need to poke with a stick to tell those exhausts are fake. The bigger spoiler is the 17-inch wheels that, as on the hector, look a size or two too small for such a large SUV. The new starry blue color is rather nice.

Though the MG Hector plus is targeted at chauffeur-driven buyers. So, I’ll start my rolling evaluation from the comfort of the back seat. Sprawled out at the back, you will have some observations about the Hector plus. His ride comfort now likes the hector, and the hector plus is also set up on the softer side. And that means low-speed ride is nice and blind and rather cushy.

It’s that when you or rather your chauffeur up. At the base, you will notice this up and down movement creep into the experience. And that movement just gets amplified the faster you go. What does help the experience in the plus? Is that refinement levels are quite good like the Hector.

The plus is available with three engine options on offer is:- It’s this Hector Plus hybrid that we have with us today. So, what’s the driving experience like? If you’ve driven the Hector, you’ll be immediately comfortable in the Hector plus. Honestly, the only point of difference is the reflection of an added row of seats in the rearview mirror.

Now, like the Hector & the Hector plus is a large car but from behind the wheel. The light steering and pretty good maneuverability make it feel smaller than it is. Performance levels are also unchanged. A 143 horsepower 1.5-liter turbo petrol engine may seem inadequate for something as large and something as heavy as the Hector plus. Remember the Hector plus tips the scales at over 1700 kilograms.

Now this engine is not the most enthusiastic. It’s not the most eager to rev. And, it isn’t outright punchy either. But typical hector plus buyers will still find plenty to like about it. It’s got a linear delivery of power. There is no shortage of power when you need it. And the high level of refinement adds charm to this package. What’s the Hector plus with a full load? And what’s fuel efficiency like? Are things we’ll only get to answer when we have more time with the MG Hector Plus.

MG Hector Plus prices start at 13.4 lakh rupees and top off at 18.5 lakh rupees ex-showroom India. This means variant to variant the Hector plus is between 40 to 65000 rupees pricier. Then the standard 5 seats Hector. Do note hector plus prices go up by 50000 rupees post august 13th. For, the added outlay over the standard Hector. You get a more premium middle row experience and the added flexibility of the third row of seats. All this over and above what we already like about the standard Hector.

It doesn’t pretend to be an enthusiast SUV, but as a comfy SUV for the family, the hector plus works rather well. Add in MG’s service and ownership packages. And you’ll find your money buys you a whole lot of SUV would, you consider a hector plus over the standard Hector. Let us know in the comments section.