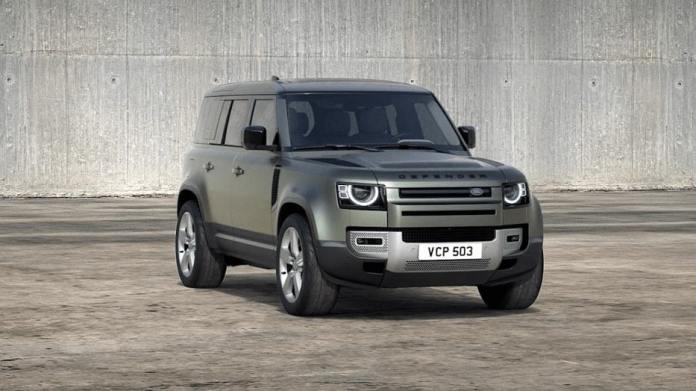 The Land Rover Defender is one of the absolute icons of the automotive world. And it’s been completely reimagined for 2020 and beyond. It is now on sale in India. And I’m going to run you through some of the many highlights of the ultimate Land Rover.

Before we get into the thick of things, you should know the defender is on sale in India in two versions. There are the three-door 90 deliveries of that start next year. And the five-door 110 that we have with us today. The 90 and 110 in their names is the approximate length of their wheelbase in inches. And is a carry forward of the old version’s naming system. So, what do we have here?

First things first, could this be anything but a Defender. It is high off the ground. It’s got these massive go-anywhere tires. It’s got this upright a-pillar, the cliff-faced d-pillar, and a spare wheel mounted on the back. This is as true to DNA as they could have gotten. There’s more of that old meets new to the design too.

The overhangs are classically short, and it looks rugged from every angle. Even the circular DRL serves as a link to the originals round headlights. The metal inserts on the bonnet are a cool inclusion too. And the optional satin finish on this very defender’s Pangea green paint adds more charm as well. Flat surfaces and a thick c-pillar characterize the side. And you’ll like that the doors extend all the way down. They’ll save your trousers from getting mucky after a day of fun in the slush.

Also, note wheel options for India include 18 to 20-inch sizes. And there is also the option of classic white painted pressed steel rims. Look close, and you’ll note an interesting choice of tire on the defender. And don’t you love how these led elements link defenders old and new of the other things, would it even be a defender?

If it didn’t have this massive spare tire on the back and, of course, a side-hinged tailgate. You can also deck up your defender to your needs with a whole host of accessories.

Not to get too geeky on you but, the Defender is a departure from the script under the skin. It’s not built on a ladder-frame chassis. But uses an aluminum-intensive monocoque in its construction.

Land Rover says the defender is three times stiffer than a body on frame model. There’s also independent suspension all around with coil springs. On certain versions of the 90 and standard air suspension on the 110. Full off-road height gives 291 millimeters of ground clearance. And a 28-degree ramp break-over angle. The defender 110’s off-road stats also include a 38-degree approach angle. A 40-degree departure angle. And a vading depth of 900 millimeters. Before you ask, here’s how those numbers stack up with those of the Mercedes-Benz G-class.

When it’s time to get in, you can lower the air suspension to excess height to ease the journey in. Now it’s quite a climb up into the defender’s cabin but hear this that’s the sound (thud) of an SUV that’s built for forever. 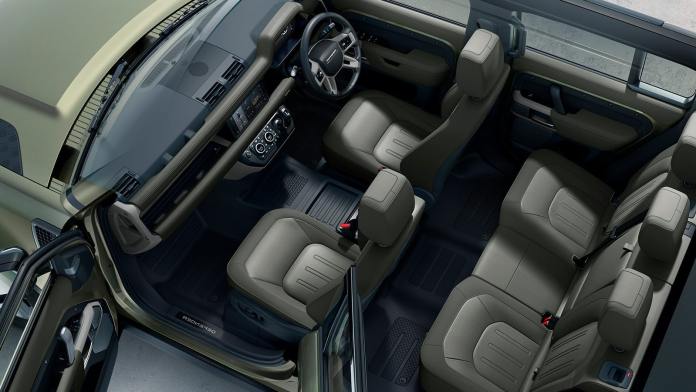 And the seating, this view out it’s where you’d want to be on many journeys of discovery. Now, this is an expensive SUV, but this is also an SUV that takes the utility in its name very seriously.

Now, whatever you see in here, is here for a reason. There are no unnecessary embellishments. And even things like this crossbeam it’s a structural element of the car. And adds that robustness to the look and feel of things inside.

And the like would be at odds in this functional cabin.

If, you’re the type who throws around stuff in your car. You’ll run out of stuff to throw in your defender. They’re so many small storage spaces all over the cabin. And what I like is that all these surfaces are finished with this non-slip rubber coating. This first edition version gets luxurious carpets, but you can also opt. For rubber mats. That is easy to clean after a muddy day out.

In everyday use, you’ll take well to the new PiVi Pro infotainment system. It’s the latest from the Jaguar, Land Rover. And it is slick, the 10-inch touchscreen is very responsive. And the system is also future proof by way of over-the-air updates, and there’s more. 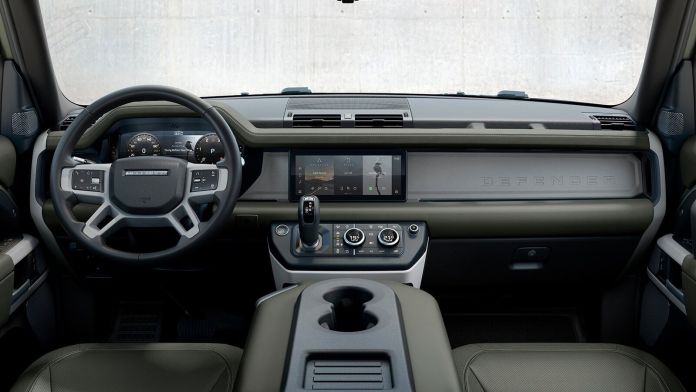 There’s a lot of clever techs that’s been packed in. Especially to do with visibility. Now, with as many as five seats in the back and a big spare tire on the tailgate. Now, You can’t see all that much from the rearview mirror. That’s where the clear side interior rearview mirror comes into the picture. And so click the switch, it activates the camera on top of the defender. And what you get is an unimpeded view of all that’s happening behind.

There’s also 360-degree cameras. Here so, you go to the screen, and you get an augmented reality image of your defender. And all the surroundings around and there’s even more when you go off-road. You have a clear side ground view in monitor. It relays the feed from the area, usually hidden by the bonnet straight.

Onto the touchscreen, if you happen to find yourself at a river crossing. Or more, realistically at a waterlogged road. There’s also a weight sensor that tells you the depth of the water around you.

First edition models also get Land Rover’s terrain response 2 system. That features a new bed program that readies the defender for a swim. There are other selectable modes as well. And terrain response 2 also packs in an auto feature. That has the electronics gauge, the situation. And prime the throttle, gearbox, suspension systems, and more. 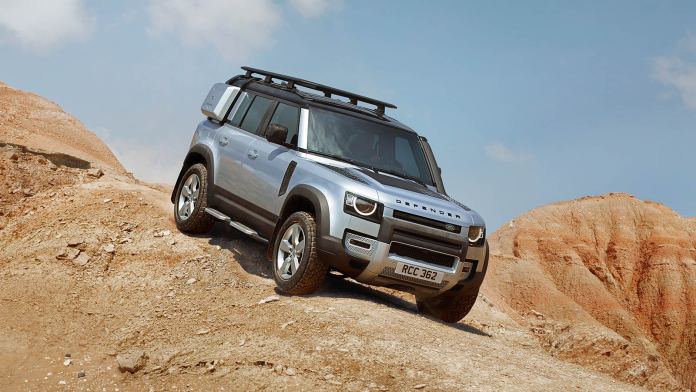 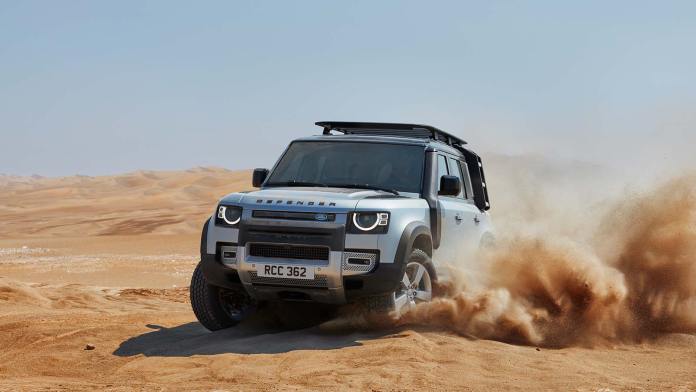 Accordingly, the low range is standard fit on the defender. Here’s a quick look at all that you get on the range-topping defender 110.

In the first edition, there are five variants on offer. And there are other permutations and combinations too. Landrover also offers three configurations for the front seats. Now, this is the standard configuration. With this very usable and handy center console. With lots and lots of storage space scattered around. There’s one option without the center console altogether. And that allows you to walk through the cabin. 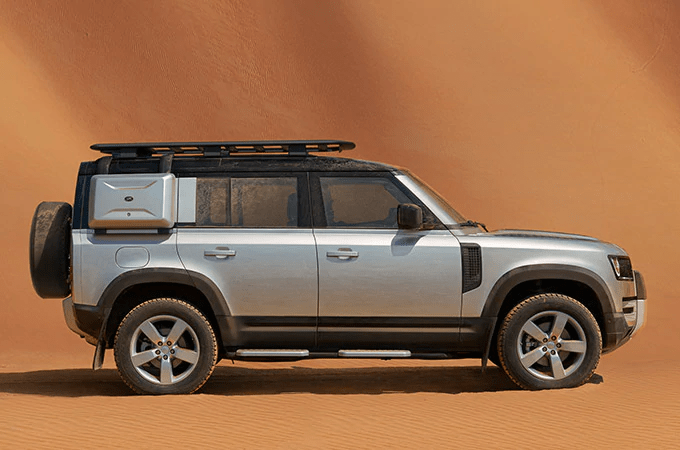 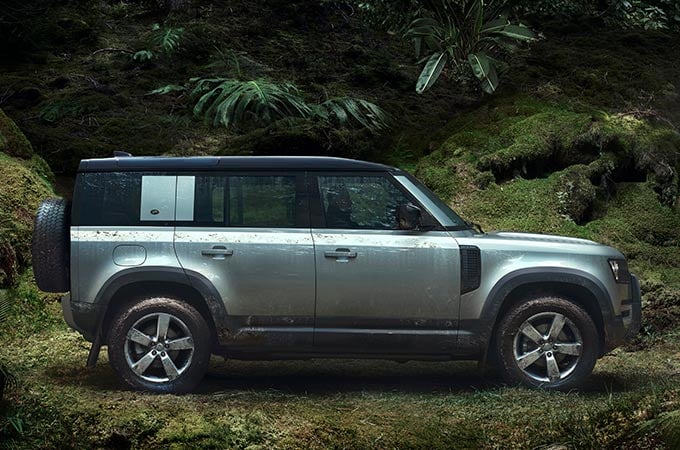 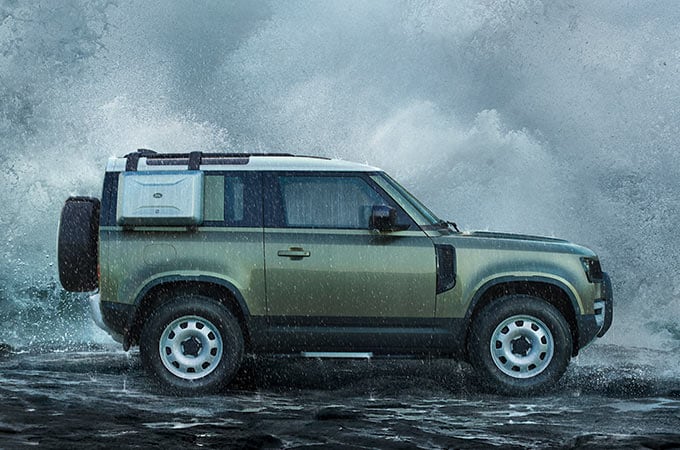 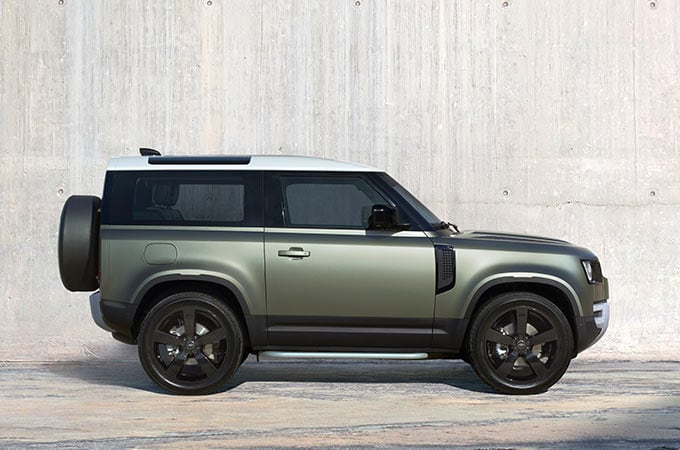 Then you also have the option of having a center jump seat. That increases the seating capacity upfront to three. As for the seats at the back, there’s a lot of utility built into the defender’s middle row. As well now there’s not one, not two, not three, there are a total of six options to connect your mobile phone. Or other electric devices.

There’s also this accessory holder that is very thoughtfully. Put in the seats themselves are split 40 20 40 that also brings in a lot of flexibility. When you have to transport your luggage. Now the seat itself is quite comfy and moves a fair bit back to free up more room.

If there’s something I’d like to bring up, it’s that the recline angle. It is a bit limited by how much you can adjust it continuing. On the topic of seating configuration options.

Defender 110s are available with the option of a third row of seats. But land rover very carefully does not call this a seven-seater. It calls it a five-plus two. The fact is these seats are not meant for adults, as is quite evident by my seating position. I’d say children up to the age of 10 might be comfortable here.

Now the defining feature for me at the very back of the defender is these alkaline windows. Now what they do is give you a good look at the peaks you might be headed to on that family vacation. Or perhaps even allow you to make eye contact with elephants on a safari. 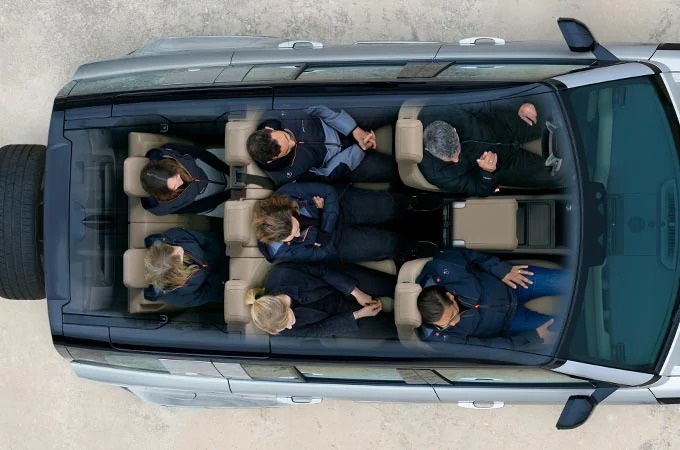 There’s a reasonable room in the boot. With all seats up folding, them down reveals a much more usable space. And you even have the option to fold the second-row seats.

If you aren’t one to pack light, loading is made easier with the option to lower the rear suspension. And again, the no-slip material for the trunk floor is handy, shifting focus to the other end of the defender.

What’s under the hood? The defender is on sale with a 2-liter turbocharged 4-cylinder petrol engine. That makes 300 horsepower and 400-newton meters. 6-cylinder petrol and diesel engines come to India next year. And plug-in hybrids are also part of the long-term plan. An 8-speed automatic is a sole gearbox on offer. 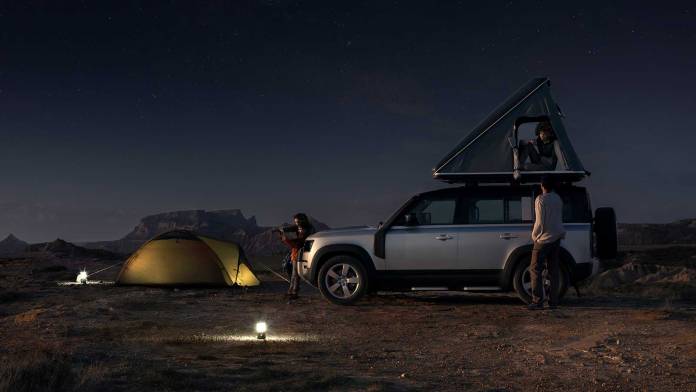 Well-spec defenders do get pricey, but for adventurers, this could be all the SUV they ever need. What do you think of the defender? Let us know in the comment section below.