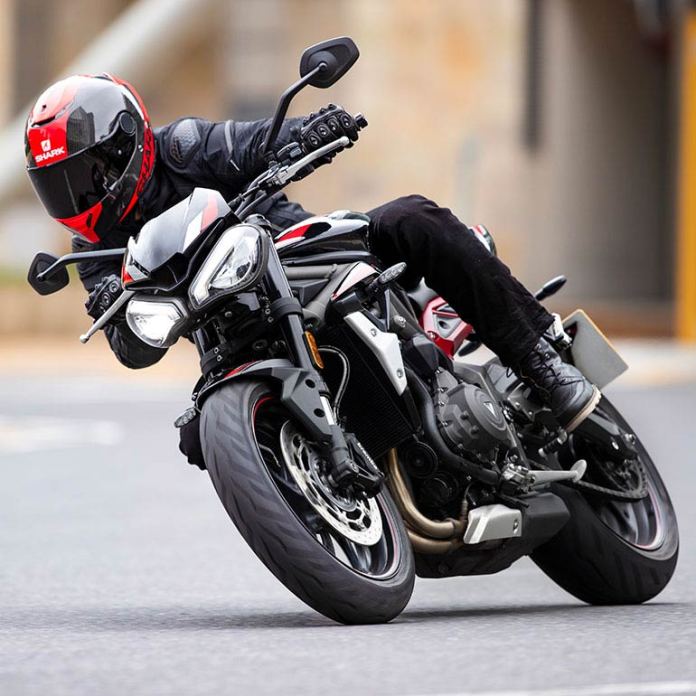 In the never-ending rat race that we call life. There are two things that we can, sort of, relying on. The first is that new products are almost always better than the ones they replace. And the second is that they almost always cost more as well. Sometimes though, something comes along that changes that trend. and this motorcycle does exactly that. The new Triumph Street Triple R replaces the Street Triple S in India as the entry-level model. in the Street Triple lineup. and it is better in almost every way

That’s a whole lot of changes, right. This is exactly why it’s such a pleasant surprise that the new Street Triple R costs less than the old street S. and we are talking about a difference of a few thousand rupees because at 8.84 lakh Ex-showroom. This bike is priced a full 36,000 rupees less than the Street Triple S. 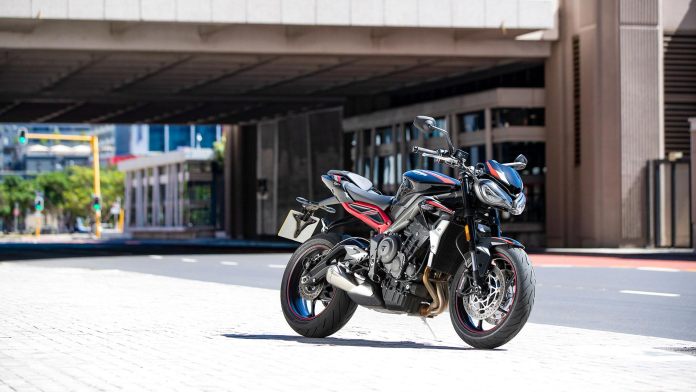 It’s also a full two and a half lakhs cheaper than the range-topping Street Triple RS. And that’s very interesting because on the road. The new R actually feels much more like the Street Triple RS than the old S. So if the S is here, the RS is up here, the R is somewhere right here, take the engine, for example. With 118 horsepower and 79 newton-meters, it makes five hp and six nm more than the S.

While this is still five horsepower down on the Street Triple RS, the torque figure is now identical to that top model. From what I can tell, the performance difference between the R and the RS can only be felt at the very top of the rev range.

Where I remember the RS pulling with a little more urgency. But, this is something you’ll rarely notice on the road. And in that sense, this 3-cylinder engine continues to be a real gem. It’s not too loud at idle. But once you get it singing, that neat looking exhaust belts out a sharper and louder sound than before. And I wouldn’t bother with an aftermarket exhaust for this motorcycle.

Beyond that, this engine is as likable as it used to be. It’s smooth, flexible and it produces an awesome scream as you chase 12000 rpm. But from a usability standpoint, what I like that has improved is that it now gets an up and down quick shifter. Trust me a quick shifter can improve the experience of almost any engine.

Another noticeable improvement in the riding experience comes in the brakes. The old bike used two-piston Nissan calipers, which were okay. But this one gets radially mounted Brembo M4.32s. Which is a huge improvement while there is still no radial master cylinder. 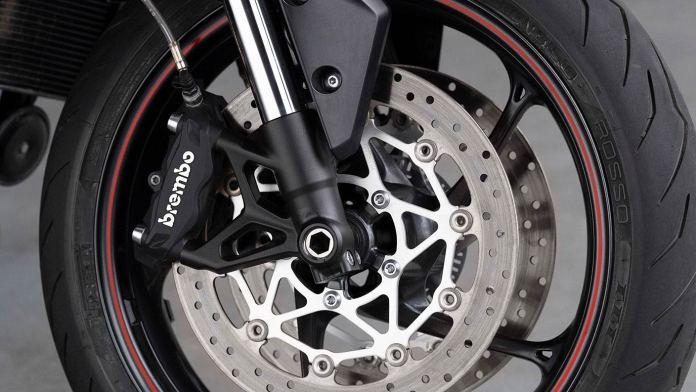 The bite and performance from these brakes are excellent for road use. and I never wished for more. Yes, the RS has even better brakes. But these are good too.

The old Street Triple S had non-adjustable suspension from Showa at both ends. This one gets fully adjustable suspension at both ends. Also, by Showa, whether this is a good thing or not. Sort of, depends on what kind of a rider you are. The old Street Triple S that actually resulted in a more comfortable feeling for the road. But this new suspension is far better, and we will surely appreciate its benefits on a fast winding road.

And especially at the racetrack, the damping quality is much improved. But this does come at the expense of firmer ride quality. And while the suspension components aren’t the same as the RS, the feeling is quite familiar. It’s not horribly stiff by any means, and it is quite reasonable for a bike this sporty. 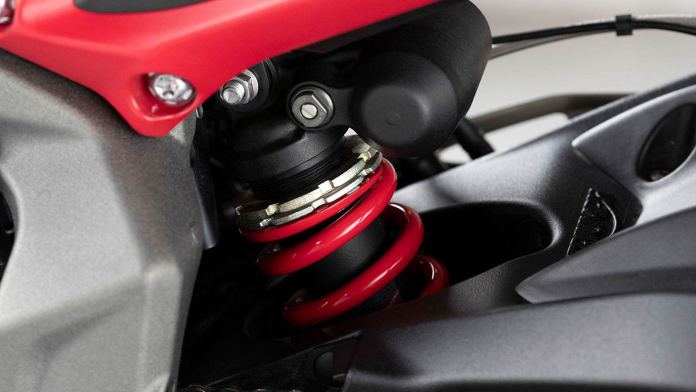 But if you are planning on upgrading from the old Street Triple S, this is something you will definitely notice. With that said, we had to get through some pretty nasty roads to check. And this Street Triple R had enough ground clearance to manage all. You have to do is be careful to protect the rims.

Another small change over the Street Triple S is in the rider ergonomics. Like that bike, there is a bit of a lean down towards the bars, and the footpegs are quite high up. What’s changed is that, has raised the seat by 15 mm, which isn’t that much. What I don’t like is that the seat curves upwards. And that means you get pushed down into the fuel tank every time you get on the brakes. Installing some grip tape on the fuel tank will definitely help you brace yourself. This is important because this isn’t just a rather powerful motorcycle.

It’s also quite light Triumph claims a dry weight of 168 kg. which is 2 kilos up on the Street Triple S. But it’s still the lightest claim weight for a middleweight naked in India.

The dry weight figure is also one kilo lighter than the BS4 KTM 790 duke. But in reality, the Triumph feels quite a bit heavier than its slightly mental Austrian rival still. It’s still an agile machine. And it glides through city traffic just like any other motorcycle.

Although the turning radius is not very good, where this bike really shines. Is when the road is smooth and squiggly of all the middleweight naked out there.

This chassis feels the most dialed in and ready to race. Throw it at a few corners, and this bike does behave like a supersport machine. With a flat handlebar, unfortunately, we had soaking wet roads to play with. But the Street Triple R didn’t really care. And the only limiting factor was how hard I wanted to push. Speaking of it does take a little bit of counter-steering effort at the handlebar to turn the bike in. 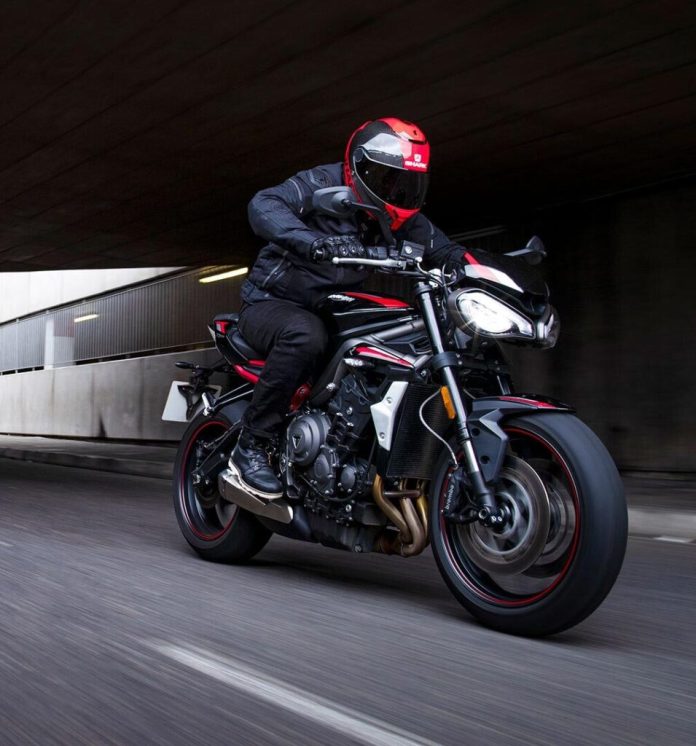 But once you do lay it onto the side. The R has that deliciously stable and grippy sensation. that you’ll only truly get from a proper sports bike. This is the sort of bike that can do anything you ask. But the real reward will only come on a smooth mountain road or, better, yet the racetrack. It’s quite straightforward, the faster you ride this bike, the more rewarding it gets.

Now the Street Triple R has always been great on the racetrack, and this one will set some blazing lap times. Even though its stock tires are one step down on the Pirelli Rosso Corsa. that came with the old S, the Street Triple R now runs Pirelli’s new Diablo Rosso 3.

Which is still a sporty tire. But it’s definitely not as racy as the old Rosso Corsa. And especially not as much as the super Corsa that you’ll find on the Street Triple RS. on the upside, these tires manage well in the wet, and they will last far longer. 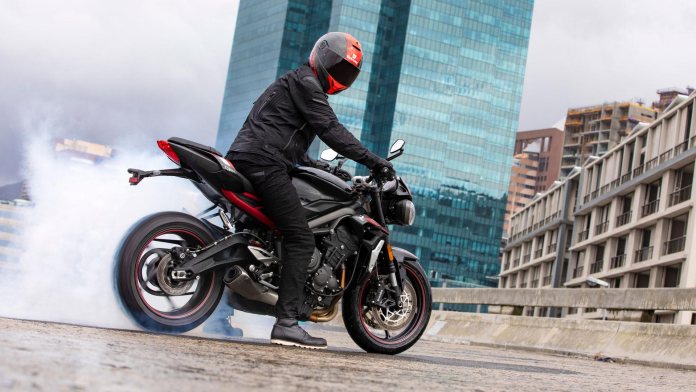 I realize we keep making comparisons to the Street Triple RS. But Triumph really hasn’t made things easy for us. I mean they, have even made it look almost identical to the rs. Although the trick to quickly identifying the r is that it gets a red panel in the center. Design-wise the r gets the same makeover that the rs received last year.

This brings in a new led headlamp, which admittedly isn’t to all tastes. And there are also a few other changes. Like the new fly screen, side panels, and smarter looking rear quarter panels. I also love the new mirrors that look classy, but unlike the bar, end mirrors on the RS. These don’t get in the way when you’re filtering through traffic. Like, most other Triumphs quality. And attention to detail on this motorcycle is at high levels.

The one thing you could consider a cost-saving measure is that this bike retains. The old instrument cluster, and it doesn’t get a TFT and the new age Triumph switchgear.

Personally, I love watching an analog needle in a constant circular dance. And while the digital display is quite basic, it does give me all the information I need. So I’m not complaining here the one thing that could be improved is that the electronics. Continue to feel a little crude and basic compared to the competition. The Street Triple R gets three riding modes along with abs and traction control.

But neither of them is corner sensitive. The throttle response is smooth enough even in the sport mode. But no matter which mode you’re in, the traction control isn’t very lenient. And when it engages, it cuts the power a little too aggressively.

The final thing I want to talk about is a little harder to describe. Because there are no spec sheet metrics to quantify this. It is the fact that Triumphs have become supremely refined. And well-rounded machines in recent years. 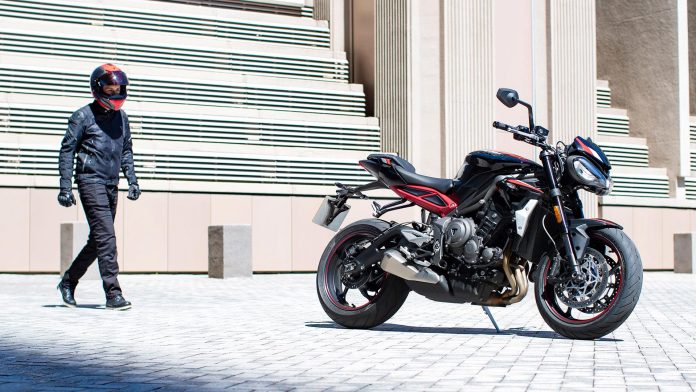 The original Street Triple 675 from 2007 was renowned for being an entertaining hooligan. But this new bike is far too well mannered for that. And it almost feels Japanese in the clinical precision with which it performs.

It quickly became clear that the Triumph is smoother a little faster. And it has better components, but the rampant little KTM had me laughing in my helmet far more often. Of course, it’s a deeply personal thing whether you like your bike super capable.

Yet well behaved or packing an unruly hooligan street still whichever way you swing it. Does not change the fact that this Triumph is a fantastically capable motorcycle.

And it comes with the company’s reputation for reliability for the level of equipment. You’re now getting the entry-level Street Triple R comes at a very tempting price point. If you like your bikes easy, smooth, and refined. but also very quick when you want it you will love what this motorcycle has to offer.