Over the last eight or so years, the triumph tiger 800 has grown to become India’s most popular big adventure bike. Naturally, then you’d assume that this new triumph tiger 900 has some, really, big shoes to fill. But what this bike has done is taken those old shoes and thrown them right out. Believe me when I tell you the triumph tiger 900 is a completely different bike. Compared to its predecessor.

The very first thing you’re going to notice is that even though the spec sheet doesn’t suggest it. This bike feels smaller, lighter, and just so much easier to manage compared to the 800.

You’ll find that the tiger 900 looks slimmer than before when viewed head-on. But it also appears to have a taller stance from every other angle. A browse through the spec sheet will confirm that the new tiger is indeed

Then the Tiger 800XRX that it replaces. But believe me, it just doesn’t feel that way in person. And that’s because triumph has worked hard to reduce the top-heavy feel of the old bike. And they’ve done this even while increasing the fuel tank capacity from 19 to 20 liters. Triumph has achieved this by moving the new engine forward. And lower down a new split radiator setup as well as a smaller oil sump have helped them to do so, without making big sacrifices in the ground clearance.

The company claims a 6 kg drop in dry weight. But it feels more like 10 or 15. continuing the theme is a slimmer new windscreen that can be adjusted on the move. This one allows more air to reach the rider, and it doesn’t create as much helmet buffering as the old one.

Now Triumph really excels at quality and attention to detail. And this bike is no exception. Finish levels are great, and even the under-seat area is neatly designed the new exhaust sits closer to the bike. That will improve luggage fitment, and the large grab handle looks practical. But it’s also nicely designed and well finished.

The modern era is full of electronic devices. You’ll be happy to know that there are two power outlets available, as well as a USB charging port under the rear seat.

I really like what Triumph has done with ergonomics. The seating position is

Now, if you’re a tall rider you want to raise it, you can do that by 20 mm. Somehow though, Triumph has made this work with a standing position. That works for a tall rider like myself as well.

What I don’t like, though, is that my knee tends to rub against this plastic panel here under braking. Now that sounds like a small thing, but when it keeps happening throughout the day. It does get a little irritating.

The seat height remains the same as the old tiger 800 XRX. And on paper, this number is identical to something as small as a KTM 125 duke. Of course, the tiger is a much

So it obviously won’t be as effortless to manage. But that low seat height will be a huge help for shorter riders.

Now before we move on to what is the biggest talking point of this motorcycle. Let’s set a frame of reference first. You see, the three-cylinder Triumph tiger was always a bit of an anomaly in the adventure bike world. Pretty much every motorcycle with serious off-road capability. Uses either a single or twin-cylinder engine because off-road riding prioritizes.

Low and mid-range grunt the previous tigers actually managed to do this quite well. With their sports bike derived 800 cc triple-cylinder engine. But with the shift of the 900 Triumphs has made some massive changes.

And that has completely changed its character, particularly in the way it sounds.

So when you start this engine up, it sounds a lot like the old tiger 800. It has that whistle, although this is now a lot deeper and raspier.

But when you get on the move and especially at slow speeds under 5000 rpm. This engine actually sounds more like a twin than an inline 3 to the rider’s ears. The new engine sounds nothing like its predecessor. And those of you who love the sports spike scream of the 800 will be disappointed, at first, I was too. But with time, I have started to enjoy the deeper new sound. And I think it matches the character of an adv bike very well.

On paper, the 88 cc increment brings no power gains, while torque increases by just 8-newton meters. Clearly, this main goal for Triumph was to meet the Euro 5 and BS6 emissions norms. But you will feel an improvement when you ride the bike. 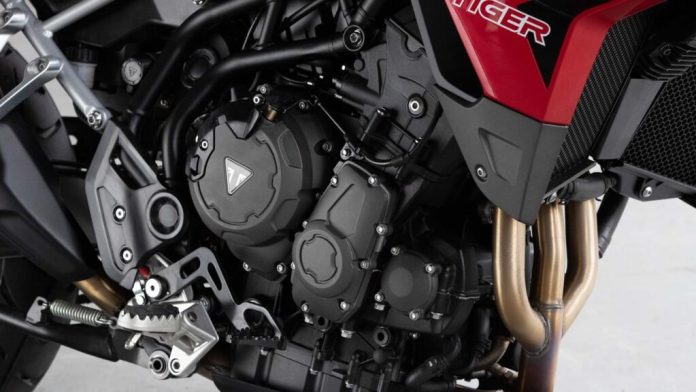 This new engine brings noticeable gains in the low and mid-range grunt. Aand overtaking seems more effortless than before. It’s something that tiger 800 customers will recognize and appreciate. But despite what triumph claims? This engine’s mid-range performance still is not quite as strong as a twin-cylinder engine.

Now just like the new engine sound reminds of a twin-cylinder, so does the way it feels. It now produces a mild pulsation that can be felt in the bars and footpegs. And below 5000 RPM, you could say that it adds a sense of character and life to the motorcycle. The problem is that this new engine isn’t as happy to rev as the 800 used to be.

Once you cross 120 kph, that pulsation in the bars and pegs, well, it turns into a vibration. And this is something that only builds with speed, to be fair. It isn’t harsh, but it’s clearly noticeable. And it’s also something that we’ve never experienced from the tiger before at this point. It’s also worth talking about engine heat. The old tiger’s chassis would get really hot in heavy traffic.. and while the tiger 900 runs quite hot too. It doesn’t seem, as bad because you don’t come in direct contact with the hot frame.

Strangely though, at highway speeds, the new split radiator sends a steady blast of hot air. Directly onto your left knee. We haven’t been able to take this bike on a long tour. So I can’t tell you that hot airstream persists for long durations. But it is something I’m keen to test.

Regardless of the heat. What is clear is that the new triumph tiger is a significantly quick machine. Even more so than the bike it replaces. So you’ll be happy to note that it gets a significant upgrade.

In the braking department, the Triumph tiger 900 comes with Brembo Stylema brake calipers. Which are the top unit stuff you’ll find only in the world’s best superbikes like the Ducati Panigale V4. Now the reason I’m telling you about this is that it’s a perfect example of why worshipping a spec sheet will never give you the full answer.

What the spec sheet won’t tell you is that the tiger 900 uses a J.Juan master cylinder. And that the initial bite is very gentle. This is a good thing. Because, of super-sharp brakes and off-road riding, especially on road tires. It’s a combination that’s about as terrible as drinking and driving. The advantage of the Stylema calipers in this application is that they offer a great feel. And progression as you build pressure on the lever. 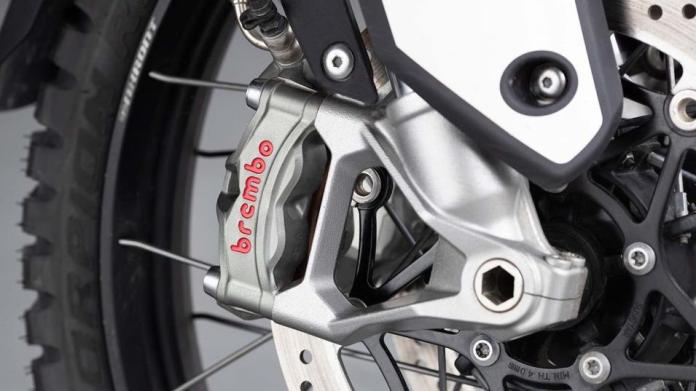 So no, they’re not superbike brakes, but they are a huge improvement over the old ones. And a very good, fit for this motorcycle.

Another welcome change is that the new trellis frame is slimmer but not longer. Comes in contact with the rider’s knees. Which was an annoyance with the old bike. Triumph has also moved to a bolt-on rear subframe as well as bolt-on rear footpeg holders. Both of which used to be welded onto the previous tiger. The front indicators have also been moved inwards. That will make them far less prone to breaking when the bike inevitably falls over.

And a fully adjustable rear shock. The rear also gets a convenient remote pre-load, adjuster. This is a great addition. Since adjusting the preload, on the old bike was a very tedious affair. I find that the new suspension works really well. Although, it is set up a little more firmly than the old bike.

Of course, the new adjustability will allow you to bring in some more suppleness if you like.

And speaking of comfort, Triumph Tigers has always had excellent seats. This one does too with spacious and well-padded buy for both the rider. And for the pillion on the road, the Triumph Tiger 900 GT is very comfortable. It’ll cover the ground at high speeds in a completely effortless manner.

The handling has improved too. The bike now has a more connected, confidence-inspiring feel from the front end. And those footpegs don’t ground down as easily as they used to. Now it’s still no Ducati Multi-Strada 950 in the corners.

but this bike is more

Then the old 800XRx. As for bad roads, well, you can throw it at the worst India has to offer. And the tiger will shrug it off with its alloy wheels 19-inch, front end, and road-biased Metzeler tires.

the GT is the road-focused version in the tiger lineup. But it can still take on a fair amount of off-roading. there’s

You can have a lot of fun jumping and sliding this bike about. And it’ll easily take on a trip to Ladakh as well. 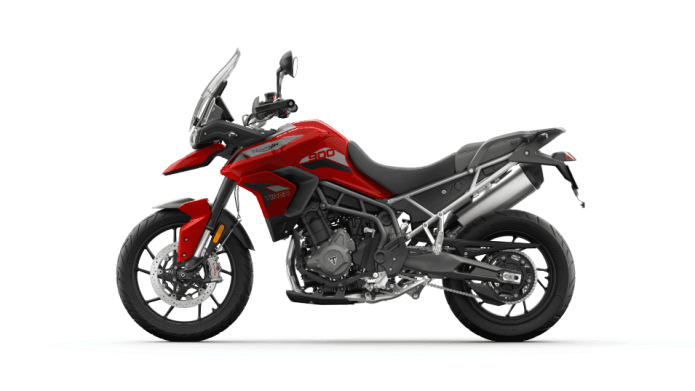 But if you want to go hardcore with your off-road riding. then you’ll want the tiger 900 rally, with its

For most casual ADV riders, though, the 900 GT is more than capable enough. 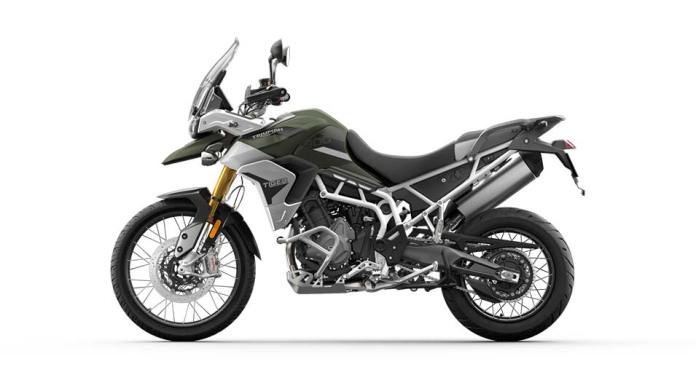 Another big improvement with this generation change is that the mid-size Tiger. Finally gets an inertial measurement unit. what does that do? is it brings cornering sensitivity to 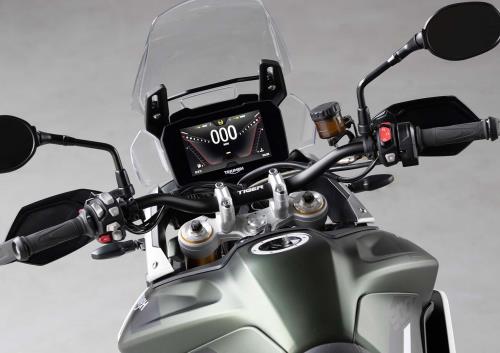 What most customers are going to enjoy, though, is that new 7-inch TFT display. It’s huge, it is the biggest unit I’ve seen on any motorcycle so far. And it’s almost like having a small television unit right in front of you. No Triumph isn’t going to let you stream NetFlix on this display.

But there’s plenty you can do with it. that includes

And you will take some time to get used to them.

The Triumph Tiger 900 GT we have here is the lowest spec model in the India lineup. but it’s still very well equipped with things like a

That is all you really need.

The only electronic feature I found myself missing was a quick shifter at 13.7 lakh rupees ex-showroom. The Tiger 900 GT costs about 40,000 rupees more than the tiger 800 XRx. And it gives you a whole lot more for the price. At the same time, Triumph has shown that it can do some seriously aggressive pricing.

Most recently, with the Triumph Street Triple R, it would be great to see the British company do something similar. for the popular tiger range as well. So you’re getting decent value for your money. and while the engine hasn’t made a great first impression. I’m happy to admit it’s something that’s growing on me. not the other way around.

Motorcycle for a wide range of riders. Ultimately it’s a really nice bike for our conditions and a very easy one for me to recommend that you go try out.