Now you’re looking at Range Rover it says so on the bonnet but what is it, is this updated Velar well look a bit closer, and this is actually the all-new Evoque and we have it here. This is a D180s version and we have it for the day to see what it offers.

so first up those stunning lines less hardy Land Rover and more la-dee-da fashion icon, the new Evoque gets people’s attention wherever it goes, and that it looks like the stunning Velar does its prospects no harm at all, and truth be told it is difficult to tell the two apart both get similar mesh grilles, slimline headlights with rectangular LED inserts, headlight extensions that run under the front doors, severely tapering rooflines, and steeply rising beltlines. So size apart how do you tell one from the other, especially if all you get is a glance well it’s not simple.
The new Evoque uniquely gets an additional slot-like opening under the front grille, the bonnet line predominantly runs around the big front wheel arch and well frankly, that’s it. 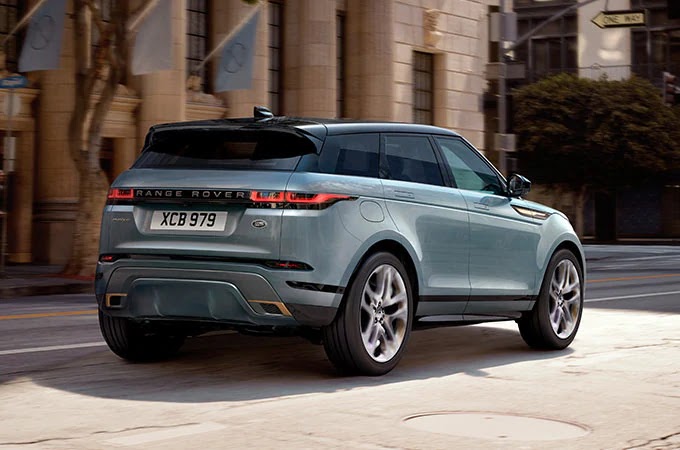 It’s also similar looking too many Range Rovers on the inside so on the inside of the new Evoque and no big surprises here but what you do get is plenty of quality like this soft-touch top of the dash, these brackets in chrome, the highlight the piano black all beautifully built, the vents here the controllers have chrome piping and dashes this is a new material which looks pretty good, now you have a touchscreen but this one below on this S trim version is the touch controller, the to control wheels placed on the center console functions superbly, the dials can be used for several modes which you can select however I don’t like the fact that you need to swap modes to control fan speed which is a pain if you are driving and want to keep your eyes on the road.
I particularly like the hooded Cobra like instrument panel cowl and I also like how the feather touch steering wheel controls can be reconfigured, while the version on test the S gets regular dials and only one touchscreen the highest spec SE gets an additional touchscreen an all-digital instrument panel or clear sight mirror and an uprated sound system with 14 speakers and a dual-channel subwoofer.

Slick operation and a high level of functionality also seem to be extremely important there are no rotary dial gear levers this time around still must say I do like the soft tray above the cupholders where you can keep your phone, and that the individual elbow rest splits down the center, and seat comfort on the front chairs are seriously good. Compared to the earlier Evoque this one has a wheelbase that’s longer by 20 mm so legroom at then, the rear is a bit better.
Now, this isn’t the ideal car to be chauffeur-driven around it and that’s of course because of the sloping roof. but actually, Range Rover plated smartly Headroom is pretty decent unless you, of course, six-foot or taller than that this sunroof you’re normally the impinge on your headroom but the sunroof is after this sort of curvier so you have a pretty fair amount of headroom. Legroom isn’t too bad and the back support and thigh support is pretty decent yes your knees are a bit up and you would want a bit more space in a car of this price but all things considered, I’m pretty comfortable here seating three abreast in the back, however, isn’t a good idea that cabin is a bit narrow and then visibility out the back isn’t very good either.

Since a large percentage of Evoques are owner-driven it must drive well too, first up however there is ride. Now over some of the sharper bumps, you do feel the stiffness in the springs, but in general, once you up the speed of the car, the ride does flatten out pretty nicely. The tall Springs seem to work better now the dampers round off bumps nicely and then what impresses is that the faster I travel over this patchwork highway the more comfortable the Evoque feels.

Yes the new Evoque has a roughly 20 mm longer wheelbase and that could Nix some of the earlier cars agility but the new platform on which it’s built also has a new floor pan that improves rigidity by around 17%. now the walk has always been a bit of a spotty handler and this new Evoque also is a pretty good, nice balance going into corners, the steering weighs up nicely, and though it isn’t as agile as the earlier car not quite it does feel pretty fun around the corners. also what I love is how neatly and quickly it tucks in if you find yourself running a bit wide the Evoque is also very comfy at high speed. also extremely impressive is high-speed stability just car feels as solid as a rock and gives you tremendous confidence and what I also particularly like are these brakes they’re super.
if not in too much of a hurry, the diesel engine also works pretty, well at low and medium speeds this Ingenium 2-liter diesel engine the 180 horsepower version is smooth and pulls pretty well from a low speed, this is because it has a variable geometry turbo that aids low-speed performance and put your foot down and the mid-range is pretty strong too and what makes it perform this well is all the torque.

The Evoque isn’t for everyone and not for those who believe size and price are directly proportional. A luxury SUV designed and built for a more evolved car buyer someone who’s been there and done that it is built with different objectives in mind. Here, compactness is a virtue, attitude, stance, and style matter more than practicality and what separates this luxury SUV from its rivals is that owners often drive themselves, yes the ride could have been a bit more comfortable at low speed, a bit more power and performance would be nice and it isn’t nearly as well equipped as it should be considering its price of around 58 lakhs.
Do remember however that the better equipped SE version is available for not all that much more and for those interested in more power and performance there’s also the 249 horsepower petrol engine of the P250 closer and priced to rivals of full-size SUV like the BMW X3 and Audi Q5, the new Evoque isn’t a car you buy with your head but then the Evoque has always been an emotional choice.