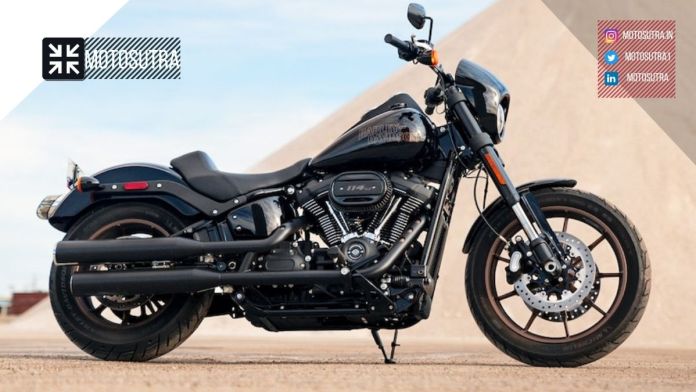 The New Harley-Davidson Low Rider S 2021 is inspired by the 80’s model. It has been a year since we do the revolutionary new Harley Davidson livewire in America.

Now this one is another new motorcycle far more conventional, instead of an electric motor. It runs on a Big V-twin. Say hello to the 2021 Harley Davidson Lowrider S.

This motorcycle is Harley Davidson’s newest addition to the Softail family. And its existence is inspired by the latest trend in America’s West Coast custom scene. You will see the effect of that in things like the mini headlamp cowl and the wide handlebar. Which sits on top of a four-inch riser.

Most of the Low rider S is in black, but there are some nicely contrasting chrome touches on the engine fins, the pushrods, and the exhaust tips. Which nicely offsets the otherwise dark theme completing the custom look in a single-seat layout.

But Harley’s accessory catalog will allow you to convert it back to a two-seater. The rest is very like the low rider, which includes the fuel tank dual gauge instruments. And the shape of the rear fender.

The low rider s uses the frame of the Fat Bob, which brings a two-degree reduction in the steering rake angle. And it also brings the fat Bob’s, USD fog and dual front Fisk pack set up.

The biggest differentiation for this bike from the rest of the software family is the design. And what Harley-Davidson calls a West Coast-style riding position. So how does this feel? Let’s call it a bit of an acquired taste to be more precise.

This seating position doesn’t feel very natural. The footpegs remain in the same mid-position layout as a standard lowrider. So your legs aren’t stretched out as far as you would imagine on a Harley-Davidson.

The handlebar position is vastly different as well, and the tall bar has you stretching forward. And wide in an urban setting, this riding position feels very California. Cool, and it is understandable. Harley-Davidson calls the lowrider s the quintessential badass American performance cruiser.

But half an hour later though this transforms from a badass to just a pain in the, you get the point.

The shoulders arms and lower back are always working to maintain this position. And the mid-mounted pegs feel a little locked in. the good news is that Harley riding positions are almost infinitely tweakable. And you could swap the bar, pegs, and seat from a range of accessory units. That will help you find something more agreeable.

In case you’re wondering why you should bother going through the effort. Well, there is one very good reason that we haven’t addressed so far for those of you curious about the name the S at the end stance was special.