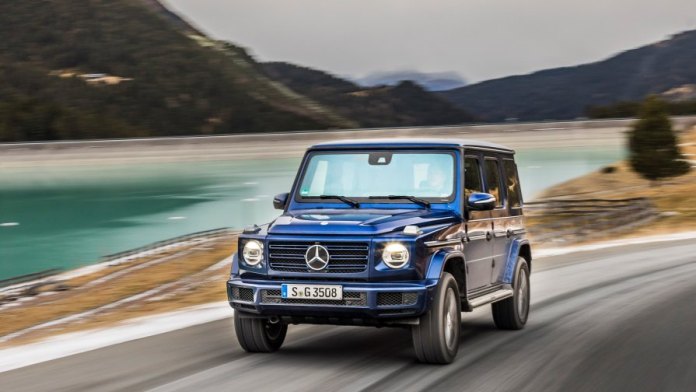 Now, I love these things they are more than just an SUV. They’re an entire occasion, and you gotta understand that thus far in India, the Mercedes G Wagon has only ever been sold in AMG. And that means big shouty petrol-powered v8 they are epic. But, their price is epic too, and they also come with epic running costs.

Before we go any further, tell us, what you think about the G 350D in the comments below. Would you choose it or stretch your budget to get an AMG G 63?

Now it’s important to remember what exactly the appeal of the G Wagen. Is especially to Indian customers in the first place for most of them. It’s the way this thing looks, and you gotta admit this diesel version sticks close to the formula. That was set by the AMG’s. The shape is pretty much the same, but, of course, there are a few differences.

The grille on the front it’s the normal horizontal gorilla as opposed to the vertical slats you get on the AMG. the bumpers are a bit different, the wheels are a bit different. And for God’s sake, there are no side pipes. Okay, they are down there. They don’t stick out of the car, this looks like any old SUV. So very sensible, but the looks aren’t the only thing people love about the G Wagon.

The other thing people want from their G class is off-road ability. Now I know what you’re thinking, who in their right mind in India at least would ever take their G wagon off-roading. Aha, well, they don’t necessarily have to but what they are buying into is the legacy of the G class. and of course, it is and always has been an incredible off-roader. So they want to be comfortable with the knowledge that their money is well-spent.

And that their G class can take them. Wherever they ever dream of going. Say, for instance, now I could have taken the road, but I have chosen instead to go across this rocky field. Just because I can, I don’t even need to use all three of the differentials. I just locked the center differential and put the car in low range, and well, it’s sailing over everything. Also helping things is the 360-degree camera that’s showing me everything around.

And this is just the tip of the iceberg of what the G Wagen can do. And since there was no off-road proving ground to really test its true capabilities. I headed over to where most G wagons in India will spend their time. Some smooth, clean tarmac to see if the G 350D could turn in the same way a G 63 can. Now, of course, a very, important part of the G 63, just like with every other, AMG is the engine. And that is, of course, something you don’t get here. In the place of the 4-liters twin-turbo hand-built V8 from a falter buck. What you get is the straight 6 (inline) 3-liter diesel from the S Class. And yes, of course, it’s BS 6 compliance.

So in place of that wonderful barking mad v8 engine note, what you get is, very good, refinement. Actually, okay, this engine would not, as quiet in this car as it is in the S-class, understandably. But it’s really rather impressive for a diesel engine. You will hear it a little bit sooner than you would in an s-class as well. Because of course, this car is a lot heavier than that car. And this engine needs to work a little bit harder to get things going.

When it does come alive, it actually doesn’t sound all that bad. This new straight-6 sounds a damn sight better than the old Mercedes v6 diesel. Let me dial it up into sport mode to tell you what I mean sounds pretty good. And that brings me to the other thing that you missed from the AMG V8.

And that is, of course, the performance that car had 585 horsepower. This one has only 300 horsepower, less at 286hp. But with a big heavy SUV like this, it’s the other figure that talks that’s almost important. While the AMG makes 850 NM of torque, this one makes 600 nm that is still quite a lot. And it makes all 600 of those newton meters at 1200 RPM. But how does that feel, well, while the AMG felt like a surprise sucker punch to the jaw every time you put your foot down. This one feels like more of a spirited nudge.

But here’s the other thing you tend to forgive the AMG G-63 quite a few things. Because it’s so mad it’s a ludicrous car, it’s a bit of a toy, and well, it does get away with a lot of small flaws. But because this G 350D is the sensible version of the G class. I think that opens it up to a little bit more scrutiny, for instance, in this car. I don’t find pointing out that rear visibility is, rather, appalling. Thanks to that huge spare tire strapped onto the tailgate.

Then there’s more fundamental stuff like the ride quality. Sure it rides a little bit better than the AMG. Thanks for using smaller wheels 20 inches versus 22 inches on that car. But it still has a very, very bumpy ride especially, at low speeds thanks to its rigid rear axle. But, it has to be said that once you pick up the pace. It demolishes potholes, speed breakers. And just about anything that goes under its wheels. This car truly feels invincible, the other thing is, of course, this is no handler. You’re not going to enjoy driving this around like you would some other luxury SUV so, don’t go expecting that at all.

The trade-off is the height of all commanding seating positions. That lets you lord over everybody around you and for most people. I think that the commanding feeling will be enough to counter the lack of this car dynamic prowess. And yes, while fuel consumption isn’t as ridiculously high as the AMG petrol v8. This diesel G-Wagen is far from what you’d call efficient. We didn’t do the full Motosutra fuel test. But over our day of mixed driving, the car’s own fuel computer showed single-digit Kmpl figures. It likely has something to do with this car 2.5-ton curb weight.

But hey, the huge size does at least mean it’s spacious. It does have a very huge and useful boot. In fact, it’s very, very practical, and the loading lip is not too high either. What isn’t so great is the back seat. You sit high up, really upright, and the Headroom is really great. Legroom is, simply not up to luxury SUV standards. The seat cushioning could have been better too. But then I guess this is one luxury SUV where the owner might actually be in the driver’s seat.

Do you see what I mean when you take the G-Wagen off its AMG pedestal? Do you have to judge it in the same way that you do to the other luxury SUVs?

Now I gotta say I love the way this cabin is trimmed. There’s leather just about everywhere beautiful brushed aluminum trim all over the place. The buttons feel nice, and everything is screwed together just so solidly.

But there is one thing to note this car is full of G manufacture accessories. Now, G manufacture is the name of the Mercedes accessory catalog. Specifically for the G-Wagon. Make no mistake the, G class has a very luxurious interior as standard. But we feel that a lot of owners won’t mind digging heavily into the catalog to make sure their car is like no one else’s.

It’s also worth noting that though this car is equipped to the same level as the G-63, we tested sometime back. A lot more of the stuff on this car is optional. Again the essentials are standard like

You’ll have to pay extra. 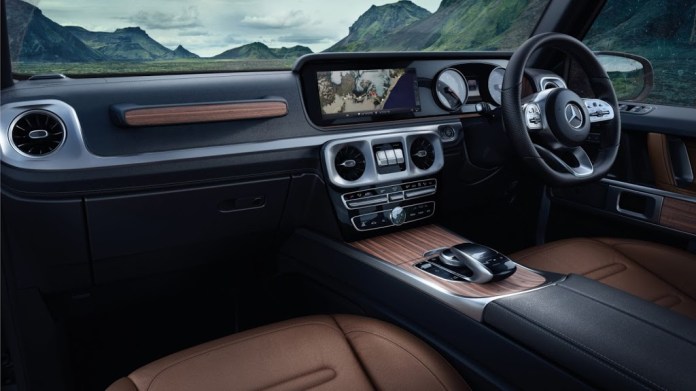 And here’s the thing at 1.5 crore rupees ex-showroom before those options. The G 350D is still very expensive sure, a G-63 may cost 50% more than this, but then this one, in turn, costs 50% more than a GLS. While usually, buyers of luxury cars are happy to settle for a smaller engine. If it means a more reasonable price does that still apply when the price is north of 1.5 crore rupees. and one of its direct rivals is  Land Rover Defender but again according to looks, no one can beat the G wagon, not even the Urus.

The diesel Mercedes G-Wagon then is a bit of an anomaly. You are certainly getting the best of both worlds. The rugged appeal of a G Class, insane off-road ability, included in a package that’s cheaper to buy and to run. Still, we suspect that most people who’ve decided to splurge on an indulgence like a G Wagon. Would be happy to go the whole hog. And just get an AMG G 63 instead.