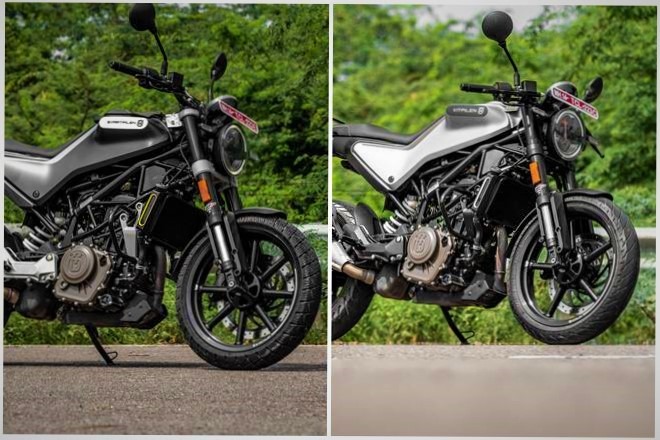 We will come later for the Svartpilen 250 and Vitpilen 250 Review. First, These two unusual looking motorcycles. You see here by a Swedish brand called Husqvarna. Now since many of you may not have heard of the brand. We will give you a short history lesson. Husqvarna has been building motorcycles since 1903. But the history behind the name dates much further back to when the company used to make firearms. The Company’s logo today is designed to look like the sight of a gun.

Now, they have a very storied history, particularly in off-road motorcycles in the late 80s.

The first modern road bike from Husqvarna with Vitpilen and Svartpilen 701. and they were followed by the 401’s. And now Husqvarna entered India with the 250s. This is the Vitpilen 250, and that is the Svartpilen 250. And that is your history lesson.

Okay, now that you know about the brand. Let us talk about motorcycles. Given the KTM connection, you would not be surprised to hear that both bikes of based on the KTM 250 platform. And they both manufactured by Bajaj at the Chakan plant. And what these bikes intend to be? It’s a modern hipster representation of classic motorcycling genres.

Underneath, you find very modern equipment lifted straight from the KTM 250 Duke. And this includes the steel trellis frame. As well as a 248 CC double overhead camshaft liquid cool single-cylinder engine. What differentiates these motorcycles is the design. And Husqvarna has gone to great lengths to remove any visual similarities to the KTM’s.

Swedish minimalism is the overpowering theme that comes to design. And there are two panels on the bodywork. One large, one that flows to the back and a little small one here. A fun fact Vitpilen is supposed to mean a white arrow, whereas Svartpilen is supposed to mean a black arrow. And that is ironic because this bike is not white, and that bike is not black. But So, what if the colors do not match the names because these are two completely out of the box designs. The upward slope by the seat meets a fuel tank is not the brand offered heritage. But at the same time, the design is unapologetically futuristic.

For example, the distinct DRL and LED illumination are in stark contrast. With the traditional circular shape of the headlamp. Also, the circular digital dial is another showcase of retro meets modern. And while it is quite functional, it is a little hard to read in the rain. Ending on the circular theme, other large round mirrors on both bikes. Which two are the fine job of showing the rider what his or her elbows look like.

Husqvarna has designed the Vitpilen to be a cafe racer. By the way, Svartpilen intends to be a scrambler. But there are a few more differences beyond the placement of the bars and footpegs. For example, the Svartpilen has

The Vitpilen gets a single seat with a taller section for the pillion. And while the Svartpilen gets a split seat. With a flatter design to match its scrambling intentions.

The lack of any unnecessary stickers gels with a sophisticated design language. But Husqvarna has given the bike some neat contrast color details. On the Svartpilen, you will get small doses of a funky green. Thus the Vitpilen uses white detailing in the same areas. Strangely the Vitpilen also gets green stitching on its seat. That does not match with the rest of the white detailing on the bike. 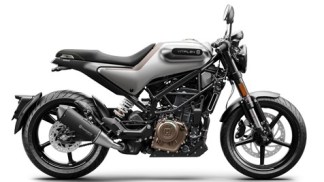 I love the attention to detail all over, and quality levels are consistent with KTM. Except for a one-panel gap that stood out on both bikes. But, with such a strong focus on a clean and minimal design. It is a pity to see such a messy jumble of wires and hoses around the engine. Even so, the Vitpilen looks ravishing with its radiant silver racy proportions. Even though, it is nowhere close to as comfortable as it is a more practical twin.

Differences Between Husqvarna Vitpilen 250 And Svartpilen 250

So those are the differences between the two bikes. But there are some very unique design details that I want to talk about more. For example, I was worried that this tank extension would come in the way of a tall rider’s leg. But there is no problem. It works is a nice brace under breaking. And then if you come over to the Rear.

You will see that this is one of the neatest cleanest tail sections on any motorcycle. That is been sold and manufactured in India. People spend thousands of rupees on tail tidies. Husqvarna has more or less than the job for you. If you are willing to sacrifice in the practicality of this grab rail. Take it off, and that will look spectacular. 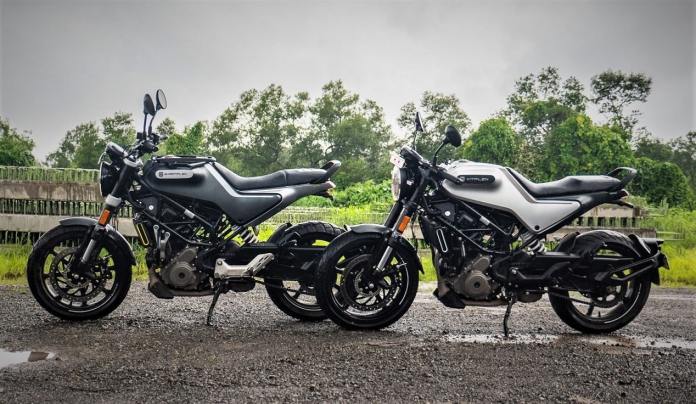 There is no question that these bikes are big on style. But the warranting on many of your minds is probably the seat height at 842MM. This is the tallest seat on any affordable motorcycle this side of the KTM 390 adventure. Now at this point but Bajaj will ask you to change your perspective and look at the seat from the top instead.

That is because the seat in the 2020 model has been slimmed down just with the rider’s legs. Would extend to meet the ground. Has it worked? I am not qualified to provide you an opinion. Here so I am going to call Someone, and he is 5 feet 4 1/2 inches tall, and as I can see, he is pretty much on his tiptoes right now. And I think this shows that the Husqvarna is good for people who about 5.6 or 5.7 at the least. For you to be comfortable on the bike.

The good news is that all riders will fit well on both bikes. As for the pillion seat, well, it is far from roomy. But it is far less terrifying than your typical R15, RC 200. And while the seats at all the whose partners are also quite small machines and they feel super slim and agile. If you like your motorcycles big, and imposing Swedish machines certainly are not for you.

In terms of agronomic, both bikes feel quite like the KTM siblings but with the rider sitting higher up. The Svartpilen is the more comfortable one. And interestingly, it also has a slightly tighter turning radius than the Duke 250. Also interesting is that while the Vitpilen has a bigger turning circle than its sibling. It is not as big as the RC 200. with KTM trellis frames underneath both confident and engaging handlers. Although we found that both bikes tend to get into a gentle, we have if you try to max them out.

With a 320M front disc, the brakes are up to the task. And you can disengage the rear ABS if you like. That being said, the bite is not as sharp as the KTM 390s. And that is because the 250s do not use the more expensive sintered pads it will find in the 390s.

Moving on to the tires, the width billing uses the same MRF Revz radials as the KTM 250 Duke. But the Svartpilen gets a new blocking pattern tire. Which is also from MRF? These new tires grip on tarmac quite well, and even in the wet. But I found that the rear feels a little different from the front when you lean into a corner. It is an unusual but not scary feeling. And it is probably down to the fact that the rear tire has much bigger and more widely spaced blocks in the front. It is just something you have to get used to.

Bajaj says that the host partner suspension in terms of slightly different from the Duke 250. and that the Rear has a little less travel. but for a couple of bites of sporty intentions. I found that the Husqvarna’s have perfectly acceptable right comfort. And they deal with rough roads just fine. Off-road swap balance blocky tires do find some more traction. And both bikes getting metal belly guard. That should prevent any significant damage from happening. 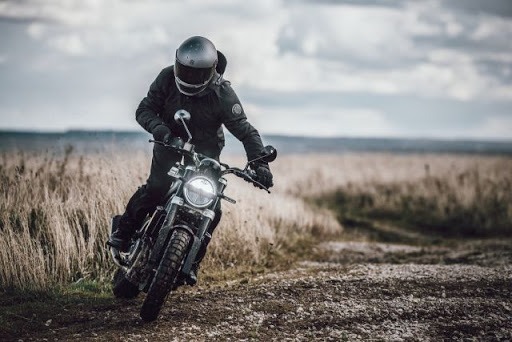 But with just under 150 MM of ground clearance, rubber footpegs that get very slippery in the mud. And completely oriented ergonomics, this scrambler is more about design than actual capability. Can you take the Svartpilen off-road? Of course, you can but only to the extent that you would with the Duke 250? It is quite obvious that whose partner has designed both these bikes for life on the road.

Husqvarna uses the engine from the KTM 250 Duke in the same state of tune. With 30 horsepower, it joins the KTM is the most powerful bike in the segment. But, the engine does not have much poke at low Revs, and while the mid-range is decent. It will be an exaggeration that can only be found between 7000 and 10000RPM.

Yeah, the Revy engine is fine, but we found that this engine also feels quite gruff. And that it creates vibrations in

These wipes are more pronounced on the Vitpilen in with its solid mounted clip-on bars. And I had numb fingers after a couple of hours of brisk highway riding. The vibrations are not annoying, but while you can live with them, it is impossible to ignore them.

Performance-wise both bikes are pretty much identical, with the zero to 100 KPH time of 9.2 seconds. This is about the same as a Suzuki Gixxer 250. Also, like the Suzuki, the whole Husqvarna can hit and or show a top speed of about 150 KPH. But these bikes are comfortable cruising speed as it is on 90 KpH. Because this engine starts to feel a little bit busy above that.

You have a couple of bikes that are happier when kept within the embrace of an urban environment.

They are both reasonably quick. But having written the Husqvarna has highlighted what an excellent job. But just did with the same engine for their Bajaj Dominar 250. Somehow, they made their engine

I think it is fair to say that the engine is not the driving force behind wanting to buy one of these two bikes.

The unique design is the big draw with these motorcycles. But there is one other factor that tempts. The Husqvarnas will be sold out of the KTM dealer network. But they have been priced a full ₹25,000 lower than the Duke 250. Which for, all practical purposes, is identical under the skin? But they are probably doing this to help establish a brand name. It most Indians have never heard of. Let alone know how to pronounce it.

That is a pretty fair asking price given what is on offer. AND it just got to show you how big the KTM range has got a little too expensive in the past couple of years. These new Husqvarna Are based on a time-tested platform, and the prices are bound to rise soon. So if you are tempted, now is the time to act.