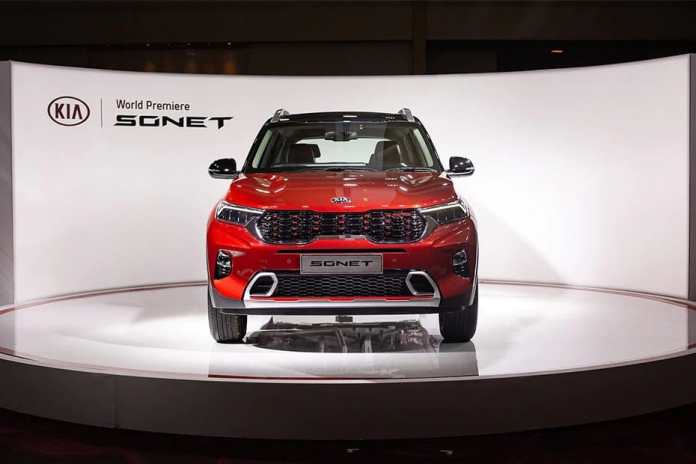 So, what I have here with me today? It is the road-ready version of the KIA Sonet. We saw the concept earlier this year at the Auto Expo. And looking at it. It looks really true to the concept, this compact SUV what we have here is the Kia Sonet GT-Line. So the top-end version of the car.

Let’s take a look at all the details on the exterior. Beginning with the headlamps, like to call this the crown jewel headlamps. Because on the inside on the DRL’s, it’s got a lot of lines. That gives it a sort of nice look jeweled look. There’s a flat area contoured under the headlamps. That gives it a lot of light play below the fog housings were earlier all black in the concept. But now we’ve got this chrome look for the fog lamps going along the bottom.

That we’re very, very familiar with surrounded by this knurled chrome as we’ve seen in the Kia Seltos. And the glossy black for the grill. So a nice strong muscular front, let’s come around.

The sides 16-inch alloys on the side, nice strong wheel arches. Which gives it a very SUV kind of look. A large amount of ground clearance looks pretty nice and high off the ground. Chrome area, along with the window line, glossy black that it forms the top part of the window line. And of course, the roof rails over here.

Now coming to the C pillar is a very, interesting area. You have the quarter glass, that is, kind of angle. The glossy black off the top of the window line meets this paint strip that is kind of wraps itself around the rear. And of course, there’s a glossy black. That extends into the rear windscreen and makes it look large, wide, and wrapped around.

Of course, you have the LED DRL tail lamps at the back. That continues that heartbeat theme. They are connected by a reflector stripe in the middle nice flattish uh area for the tailgate. You’ve got skid plates here underneath as well. These are in the glossy black again little chrome look for the um dual exhaust. But they’re there just for Show. They’re not really.

The exhausts at the back that’s just four appearances. Let’s take a look at the boot. You could get uh a couple of suitcases in here, really nicely and easily. And for this size of a car, I think I have to say that this boot looks nice large size. We don’t know its exact volume just yet, but we’ll have to find that out.

We’ll get inside and take a look inside, shall we? So starting from the back seat well for the size of the car. That it is a compact SUV, I’d have to say a reasonable amount of legroom here. Uh, I have, sort of, set the seat position for a six-footer in front. So behind a six-footer, I’ve got enough and ample space, and even someone taller will have a lot of legroom over here. The floorboard is quite flattish with a little bit of a central tunnel. So yes, you can fit a third person here.

So yes, uh quite well equipped in the rear seat as well. There is also a sunroof. Uh, yes, you do get a sunroof with this car. So a small little sunroof for the front area.

Let’s get in and take a look at the dashboard. And what the front seats feel like okay, so getting into the front, you know we’re used to this from Kia now. Good top-notch quality soft plastic for the top area of the dash. It is got texture, it looks really nice, with large chunky air vents. I’m not sure I like the two over here in the center. They look really, really large. But you’ve got the 10.25-inch Infotainment that is, a really, good size for this car.

Touchscreen infotainment system sort of looks like a single screen. That leads into the glossy black for the binnacle area.

Because this is the auto version, nice Matte chrome surrounds for this with that knurl look. Little things that really highlight this cabin make it look very, very rich. You’ve got a bose seven-speaker system. It is really good as well. Really has all the bells and whistles nice comfortable contoured seats with the sides. That kind of holds you in your seat comfortably. Yeah, this feels really good.

Let’s take a closer look at the infotainment screen and see what all can be accessed. So, a lot of features over here you have the

So, yes, this car comes really, really well equipped. Now let’s recap all the features I spoke of and take a look at the safety features too.

So, you can expect the Kia Sonet to come with

They will come mated to manual and automatic transmissions. You will get the DCT as well. But what you will get this time around is the intelligent manual transmission (iMT) too. What does that mean? Well, you’ll have a manual gear lever. You would not have the clutch pedal. The car’s electronics will operate that for you.

Well, looking at it sexy, strong, striking, and feature-packed. Here’s another car from Kia that is going to wow customers in the market. When can you expect it? Well in, the middle of September.